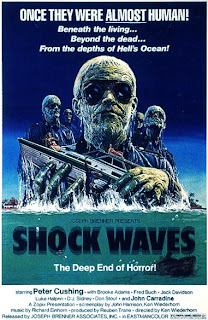 ...aka: Almost Human
...aka: Death Corps
Directed by:
Ken Wiederhorn
A boat with various vacationing characters on board ends up being damaged after a run-in with a ghost ship, forcing the survivors to make their way to a small, seemingly unpopulated island. There they find both an abandoned mansion and who they believe to be the island's sole occupant (Peter Cushing), but having adequate shelter is the last thing on their mind when members of their group start disappearing or turning up dead. As it turns out, Cushing is actually a former SS Commander who was part of a top secret German experiment thirty years ago (during WWII) whose chief objective was to create unstoppable zombie soldiers. The undead soldiers - pale, wrinkly, blonde-haired and decked out in goggles - don't require food or oxygen, can stay submerged underwater for however long they need, are nearly impossible to kill and have only one purpose - to kill. Now they have all the fodder they need.
.
This movie terrified a lot of kids back in the 70s and I think it holds up pretty well today. The violence and gore are very tame by today's standards (it was originally rated PG) and the very slow pace isn't going to be to everyone's liking, but the zombies themselves are scary looking and scenes of them emerging from the water CARNIVAL OF SOULS-style still deliver the creepy goods. The tropical island atmosphere is a nice backdrop and putting the characters far away from civilization helps to establish a feeling of hopelessness i.e. you can't kill these things, and you can't get away from them, so what are you really supposed to do?
.
The always-likable Brooke Adams (from the INVASION OF THE BODY SNATCHERS remake) has one of her first lead roles here. Luke Halpin (from Flipper) has a major role, as well. Cushing is a bit underused, though, and doesn't even show up until later in the film and John Carradine is pretty much wasted as the ship's captain, who's one of the first to be killed off. Alan Ormsby did the minor, though effective, zombie designs and future director Fred Olen Ray receives a still photography credit. A couple of awful Eurotrash zombie movies - OASIS OF THE ZOMBIES (1981) and ZOMBIE LAKE (1980) specifically - would later reuse the 'zombie soldier' theme. Director Wiederhorn also made RETURN OF THE LIVING DEAD, PART 2, which had more violence and gore, but less chills.
★★1/2
Posted by The Bloody Pit of Horror at 9:51 PM