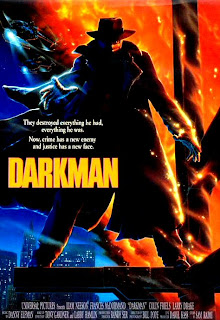 Directed by:
Sam Raimi
Sam Raimi borrows elements from THE INVISIBLE MAN, THE PHANTOM OF THE OPERA and several other horror classics for this dark, comic book-style revenge tale, which can now be seen as the direct link between Raimi's grittier, low budget horror efforts of the 1980s and the more polished, expensive SPIDER MAN series of today. Liam Neeson does a fine job as the kind-hearted hero, a scientist working on a breakthrough of synthetic skin for cloning body parts, who's attacked and left for dead by sleazebag henchmen with political and mobster ties. Using his brilliant scientific know-how to mask his badly scarred face, "Darkman" lurks in the shadows waiting for a chance to get back at his attackers. Raimi's over-the-top approach can be a bit over whelming at times, but it's well countered by realistic and likable central characters (including Frances McDormand as Neeson's co-worker and love interest) who we want to root on, plus remarkable make-up effects and stunt work and suitably slimy performances from Colin Friels, Nicholas Worth and Larry Drake as the bad guys. The cast also includes Bruce Campbell, Dan Hicks and Ted Raimi (all of whom appeared in EVIL DEAD 2), Aaron Lustig, wrestler Toru Tanaka, Neal McDonough and cameos from directors John Landis as a physican and William Lustig and Scott Spiegel as dockworkers.

Danny Elfman composed the score, Jenny Agutter puts in an uncredited appearance as a doctor and several direct-to video sequels (starring Arnold Vosloo) followed in 1994 and 1995: DARKMAN II: THE RETURN OF DURANT (with Drake returning) and DARKMAN III: DIE, DARKMAN, DIE.
★★1/2
Posted by The Bloody Pit of Horror at 1:02 AM