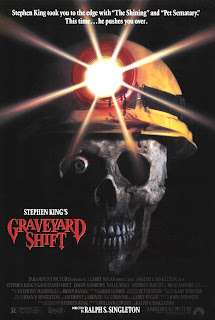 Directed by:
Ralph S. Singleton
Based on a short story by Stephen King, this dark, dreary misfire is one of the worst of the King adaptations, though I'd take it any day over MAXIMUM OVERDRIVE (1985), THE LANGOLIERS (1995) or THE TOMMY- KNOCKERS (1993). Bland hunk David Andrews stars as a drifter who likes to keep to himself and starts the late shift at Bachman Mills, a grimy textile factory headed over by sleazeball boss (an over-the-top Stephen Macht). The basement work crew start falling prey to a giant rat monster that lurks undergound. Real rats are all over the place too, to clean up the bodies. The gore effects are mostly top-notch, the sets are good and there's plenty of violence and action, but this movie is still one big unpleasant cliché thanks to poor direction and scripting (by John Esposito), plus uneven performances. Everyone yells and screams a lot, but Kelly Wolf (as a tough female worker who can hold her own) and Brad Dourif (appearing in a small role as a 'Nam vet pest exterminator named Tucker Cleveland) are the only two who bring any spark to their roles. The director wisely went on to production jobs after this. With Andrew Divoff (the evil djinn from the first two WISHMASTER films), Richard France (from Romero's DAWN OF THE DEAD) and Vic Polizos (NIGHT OF THE CREEPS).
★1/2
Posted by The Bloody Pit of Horror at 11:36 PM