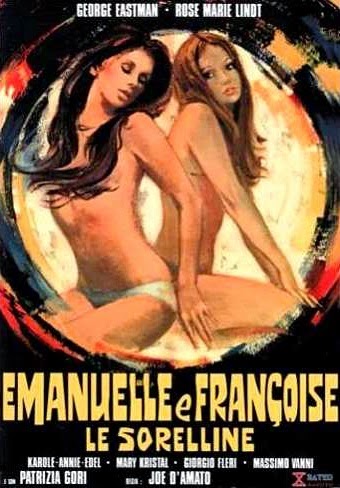 
Laura Gemser isn't in it, but Rosemarie Lindt is here and ready, willing and able to disrobe at any given opportunity. She's Emanuelle, a successful fashion model with one problem... her sister Françoise (Patrizia Gori) has committed suicide because of the brutish treatment she received from her vile behemoth boyfriend (big guy George Eastman, from those Anthropophous movie). To get revenge, she seduces, drugs and then chains her attacker up in a secret room behind a one-way mirror where he must watch in sexual frustration as she taunts and teases him with a parade of men and women she brings home to play with. Not surprisingly for a D'Amato venture, this is not your standard sex film and despite generous amounts of unexposed flesh on display, it's far from erotic. There's violence, gore, full frontal nudity (of both genders), warped dream sequences, rape, dinner table masturbation scenes (bordering on hardcore, at least in the uncut version) and much more that you may not expect. Like many other films from the director, it's extremely sleazy yet also lethargic, dull and poorly acted by the majority of the cast. The only two memorable bits are a sick-o nightmare sequence with Lindt being pinned down by four women and raped with a wine bottle and the finale, where someone in the cast ends up a gory mess after being chopped up with a meat cleaver.

And no, none of this is as entertaining as it sounds. Low production values don't help and neither does the dubbing, crummy plot or all of the time padding, which combine to make it a depressing chore to sit through. Fans of these things will still be interested because it predates Joe's more well-known 'Black Emanuelle' series starring Gemser, and was obviously re-titled Emmanuelle's Revenge in America in an attempt to cash in on that series. One of the supporting actresses even goes by the fake name "Mary Kristal" here, probably to try to trick people into thinking it was actually Sylvia Kristel of Emmanuelle (1974) playing the part. Oh Euro exploitation; thou doth confuseth me. In America, it was originally released to video in both both R and unrated versions. Now it's on DVD uncut so we all can, uh, enjoy (?) it that way.

Annie Carol Edel (Crazy Desires of a Murderer) and Massimo Vanni (who sometimes goes by "Alex McBride" and was in Rats: Night of Terror, Zombie 3 and others) co-star.