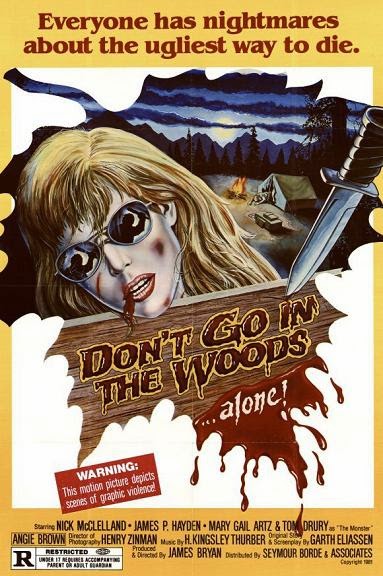 
Is this some kind of bad joke? That's what I'm still trying to figure out after watching this annoying and hopelessly inept mess; easily one of the worst American slasher flicks from the busy early 80s. It's hard to tell whether it's accidentally terrible or the filmmakers went out of their way to make it as bad as possible. Even though it's against my better judgment having seen several of the director's other films (Lady Street Fighter, anyone?), I'm tempted to think it was all on purpose. Just listen to the dialogue and the irritating, whiny, dubbed over voices. They couldn't possibly be serious, could they? I'm still not sure. All I know is that I'd personally rather watch a terrible film that was made by people with good intentions than one that was horribly done on purpose. There's just something really snide and cynical about doing that. Either way, this is terrible regardless of the original intention, so I guess you could say they met their goal if indeed that was their goal. Congratulations, I guess... The entire 82 minute run time seems to consist of three things. 1.) shots of trees 2.) shots of people running around and 3.) shots of people getting killed. The editing is terrible, it's full of continuity errors and the sound seems post synch, as if they couldn't afford sound and had to dub it all in later (and boy did they chose the most nasally and annoying voice actors ever). There's some blood and the body count is relatively high. The photography and Utah locations aren't bad either; apparently the director had also worked for National Geographic in the '60s. Still, it's hard to appreciate the good stuff when every other filmmaking sin occurs before your very eyes.

Almost every scene is set up the same way. Miscellaneous shots of the forest (mainly trees, mountain tops, streams and a waterfall), followed by shots of people walking around in the woods, followed by the obligatory "someone's watching you" POV shot and capped off with the murder. There's no attention paid to developing tension and even less attention paid to trying to build any kind of suspense. Just a random series of people entering the woods and getting killed. The killer is a fat, grungy, spear-chucking mountain man dressed in animal furs and wearing some strange beaded headdress that goes around his face. He growls, stares wide-eyed at the camera and has no motivation whatsoever for killing. Just your run of the mill boogeyman, but that's expected for one of these movies. There's no attempt at characterization for anyone else either; it only loosely follows four people; two guys and two girls, the latter both sporting butch haircuts. As they goof off and hike around aimlessly, other people (mostly a bunch of middle-aged Dick and Jane's dressed up like tourists) show up just long enough to get killed. Arms are chopped off, heads are chopped off, people are impaled or knocked off rock ledges, a woman's van exploded after being pushed down a steep embankment and (best of all) a guy gets a bear trap to the face. So if all you want a senseless succession of murder scenes done with little talent or imagination, this may do the trick.

Code Red went all out with their 20th Anniversary DVD release, though. There's an excellent featurette with interviews from most of the cast and crew, a poster and still gallery, a talk show appearance and two commentary tracks; one with director Bryan by himself, and one with Bryan, female star Mary Gail Artz (who went on to become one of the top independent casting agents in Hollywood) and fan Deron Miller (from the band CKY), who also provides an intro for the movie.

Ha! Then this movie wasn't the bad nightmare I thought it was. I actually did see it in a theater in the 80's. I seem to remember it had a wacky end theme with a guy singing "don't go in the woods or you'll get chopped up" or maybe that was a nightmare! Amazing extras on the DVD. I might have to check it out!!