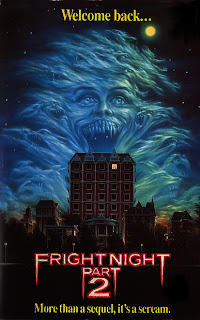 Directed by:
Tommy Lee Wallace
Charley (William Ragsdale), now in college and trying to adapt to a normal life with girlfriend Alex (cute Traci Lin), comes to believe that vampires are stalking and killing students on campus... and he's right... yet again. This time, it's exotic Regine (Julie Carmen), the sister of dead vampire Jerry Dandrige from the original, who's brought along a bloodsucking entourage that includes a black drag queen (choreographer Russell Clark) and a muscle-bound ogre (Brian Thompson). She's also out for revenge against Charley and "Fright Night" TV horror host Peter Vincent (Roddy McDowall), who's brought out of vampire-hunting retirement one last time. This sequel (from the director of HALLOWEEN III: SEASON OF THE WITCH) looks good, it's mostly well acted and made, and has some decent Gene Warren special effects, but being a completely unnecessary cash-in sequel also means it's silly, contrived. and lacks the freshness of part 1. It's also not nearly as scary, funny, entertaining or inventive as the first film. The cast includes Jon Gries (TERROR VISION), Merritt Butrick (DEATH SPA), John Lafayette (THE TERROR WITHIN) and Neith Hunter (SILENT NIGHT, DEADLY NIGHT 4).
★★
Posted by The Bloody Pit of Horror at 1:42 AM