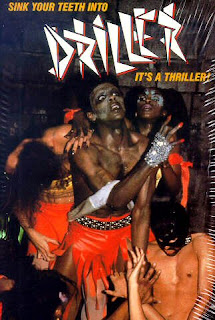 Directed by:
Joyce James
"Thriller" (directed by John Landis), from the best-selling album by Michael Jackson, is considered by most to be the best music video of all time. It was popular enough to influence many horror films from the era and here is another direct, feature length copy. It's complete with an effeminate Michael Jackson clone (played by "Mr. J") with a sequined glove, dancing zombies, a pretty close copy of the Rick Baker-designed werewolf creature and confused female lead Louise (Taija Rae). And geesh, wouldn't you know it, it's also a hardcore 80s porno. After Rae whines her way through sex with her dorky boyfriend, she fantasizes about her hero turning into a werewolf and raping her with a long, flexible, mutant penis that spews green slime all over her. Zombies show up, and most of the rest of this tape is too dark, unappealing hardcore on a dungeon set intercut with Mr. J and some of his living dead minions doing a hilariously bad dance routine. A woman masturbates in front of a monster that must be related to The Toxic Avenger, who urges her on. Two gold-painted women use glowing vibrators. Louise watches until she finally joins in on a long orgy featuring zombies (one with an EXORCIST tongue), wolf creatures, the gold women and men with Nixon, Reagen and Abraham Lincoln masks on. It's actually pretty disturbing! The dialogue seems like it was all dubbed in later, but the film was shot on 35MM, so at least it looks halfway decent. The cast includes George Payne, Renee Summers and Esmeralda as "the spurting girl" (don't ask).
.
It's hard to imagine just who this was supposed to appeal to, but what the hell, the 80s can now officially rest in peace. Recent revelations that linked Michael Jackson to several hardcore filmmakers give this a little unintentional subtext now. I've also read that Mr. Jackson tried to sue the makers of this film at one point to try to stop distribution, but haven't been able to verify it. Roger Watkins (director of the notorious LAST HOUSE ON DEAD END STREET) was the production manager.
★
Posted by The Bloody Pit of Horror at 2:03 PM