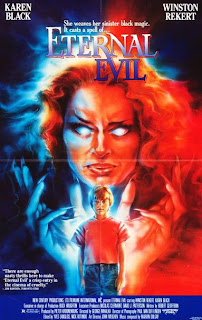 Directed by:
George Mihalka
Winston Rekert stars as Paul Sharpe, a selfish and miserable former documentary filmmaker, now making TV commercials and having marital problems, who has been toying around with astral projection. Meanwhile, a detective (John Novak) is investigating a series of bizarre murders where people who claim to see ghosts (and get on Paul's bad side) are being crushed from the inside out. Is Paul somehow acting out his subconscious wishes while out of his body? Karen Black scores in a busy supporting role as Janus aka Amelia, an eccentric lesbian New Age guru who seems to fit into the puzzle somewhere. Mihalka (who is best known for the 1981 slasher MY BLOODY VALENTINE) has created an ambitious, intelligent, underrated horror film on a low budget here that deserves to be re-evaluated. Instead of overdoing the special effects, he uses Christian Duguay's arresting camerawork (slow-motion, high angles and fast motion) to eerie effect and incorporates jagged editing techniques to illustrate the dreamlike power of an out-of-body experience. The story (written by Robert Geoffrion) takes many unexpected and interesting twists and turns, but the director tries his best to bring together the hodgepodge of borrowed horror and fantasy ideas thrown at him and does a good job for the most part. Not without its share of flaws, but it's still definitely worth a look.
.
It was filmed as THE BLUE MAN in Montreal and was nominated for two Canadian Genie Awards, including on for actor Rekert and one for Marvin Dolgay's eerie score. Lois Maxwell (Moneypenny from the James Bond series) has a neat one-scene cameo and the cast includes Patty Talbot and Andrew Bednarski as Paul's wife and young son, busy character actor Vlasta Vrana (who appeared in many of Cronenberg's early films) as Paul's friend and co-worker, Ron Lea, Anthony Sherwood (TERROR TRAIN) and Walter Massey (EVIL JUDGEMENT).
★★★
Posted by The Bloody Pit of Horror at 3:16 AM