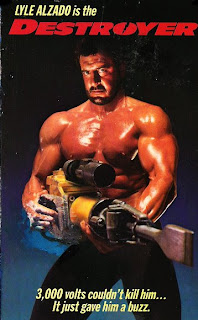 ...aka: Edison Effect, The
...aka: Shadow of Death
Directed by:
Robert Kirk
A closed-down prison is the setting for this above average shocker (pun intended) about an executed mass murderer (muscleman Lyle Alzado) returning from the dead to kill off the cast and crew of a low budget movie shooting in the same prison he met a electrifying demise (ok, I'll stop now) years earlier. Deborah Foreman (WAXWORK) is her usual fun and enthusiastic self as our tomboy stuntwoman heroine and Anthony Perkins seems to have a blast as the harried director of "Death House Dolls," the women-in-prison exploitation movie in question. Alzado (who passed away in 1992) attacks his role with gusto, and manages to make his character alternately campy and menacing. It's an entertaining thriller, the film-within-a-film format is used well and there are good performances, a few clever murders and several good electric chair scenes to keep your interest. The video box it comes in though is ridiculous, and usually ended up in the action section of video stores. Also in the cast are 80s heartthrob Clayton Rohner (who had already appeared with Foreman in APRIL FOOL'S DAY) and Jim Turner. It's not on DVD yet, but certainly deserves to be.
★★1/2
Posted by The Bloody Pit of Horror at 8:39 PM