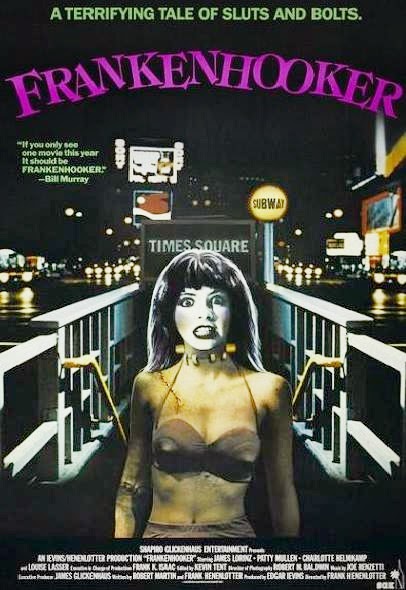 
After his chubby girlfriend Elizabeth (Patty Mullen) is killed after being run over by the remote-control-operated power lawnmower that he invented, novice New Jersey mad scientist Jeffrey Franken (James Lorinz) comes up with a plan. He keeps his beloved's head back at his garage / lab on ice and takes a trip over to 42nd Street in New York City to search for the perfect body to attach it to. He also invents "supercrack;" a drug that makes anyone who smokes it blow up. A slew of topless hookers get it, smoke it and explode, giving Jeffrey all the spare body parts he needs. Once stitched together and brought to life with lightning, Frankenhooker is born and manages to escape to the streets for a series of low-brow adventures that usually end with someone dead. You may wonder how a movie with a premise like this could possibly miss out on the laughs, but this one just doesn't always strike the right chord. The humor itself is hit-or-miss and it's simply hard to buy silly, lighthearted, colorfully-presented slapstick one minute and then dehumanizing, tasteless gags directed at homeless people, prostitutes and drug addicts the next.

However, several of the cast members help to elevate the material a notch and keep it worth watching. Mullen (Penthouse Magazine's 1987 "Pet of the Year") gives a fantastic comic performance and shows a gift for physical comedy as the pieced together new girlfriend, complete with super strength, the memory of a hooker and the ability to make men's heads spin... literally. It's too bad her acting career didn't amount to much (she was previously seen in the obscure 1987 supernatural slasher Doom Asylum and little else) because she seemed to have a lot of natural comic potential and screen presence. Lorinz is also a big plus and perfects his sighs, grimaces, double takes and comic screams with a great Jersey accent and humorous over-the-top panache. He also had a small, scene-stealing role in STREET TRASH (1987), another very gory film shot in New York City that was in very bad taste.

Louise Lasser (Jeffrey's mom), Shirley Stoler (bartender) and John Zacherle (TV weatherman) all put in cameo appearances, as do Henenlotter film regulars Beverly Bonner (who has appeared in all six of the director's films) and Joe Gonzales (as Zorro, the pimp) and Vicki Darnell (as a hooker), both of whom had memorable roles in BRAIN DAMAGE. Some of the other hookers are played by Jennifer Delora (SAVAGE LUST), Playboy Playmate Charlotte J. Helmcamp, Penthouse models Kimberly Taylor and Susan Napoli and adult film actress Heather Hunter.

It was threatened with an X rating due to gratuitous nudity and gore, so it was released unrated instead. The original video box, which has actor Bill Murray's endorsement, had a button you could push that said one of two Frankenhooker catch phrases; "Wanna date" or "Lookin' for some action."