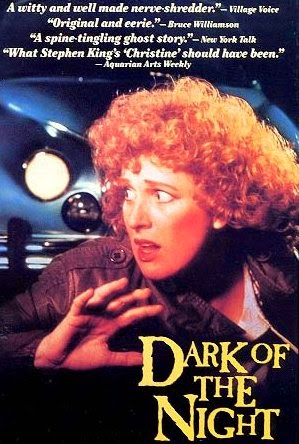 
Frumpy redhead Meg (Heather Bolton, in a very likeable performance) is a single 'Plain Jane' who purchases a used Jaguar while visiting her mother and, on her way back home, encounters both a strange hitchhiker (David Letch) and the ghost of the car's former owner, a young woman who was brutally murdered inside that very vehicle. Initially scared of the ghostly car, it eventually helps her fend off the hitchhiker when he shows up looking for her. Director, co-scripter and co-producer Gaylene Preston keeps her film entertaining from start to finish and leaves a distinctly personal (and distinctly female) mark on this atypical ghost story (with social commentary) that gives it a special edge over similar films. Though slow-moving and probably not for all tastes, this adaptation of a story by Elizabeth Jane Howard (originally titled Mr. Wrong before getting a more nondescript U.S. title) has some eerie moments and suspense, as well as some thoughtful dialogue, and it's all anchored by a winning performance from Bolton, who's a refreshingly non-Hollywood type of leading lady. For my money, it's a better killer / haunted car movie than either The Car (1977) or CHRISTINE (1983).