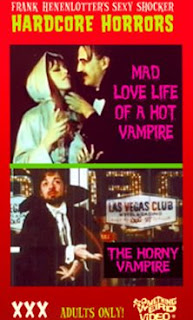 Directed by:
Ray Dennis Steckler
Count Dracula's bearded, overacting nephew Count Talcum (?) skulks around Las Vegas in a suit, cape and bow-tie spying on and trying to pick up (some pretty haggard-looking) women. He acts like a third-rate lounge comedian and reads aloud from "1001 Ways to Seduce Women" while doing annoying double takes, running into doors and talking to the camera with his forced Lugosi accent. Meanwhile, people in the Vegas street scenes look at the camera in disbelief and we're subjected to more lame gags, terrible dialogue and irritating overacting. The vampire is played by Victor Alexander, who would go on to play El Sharif in ILSA, HAREM KEEPER OF THE OIL SHEIKS (1976) and Dr. Ivan Cock-Luv (!) in something called NAZI SEX EXPERIMENTS. Now here's the confusing part of this short subject. Apparently there are two versions of it that were released to video. The first has hardcore sex scenes and the second version does not. I saw the latter and judging by the actors and actresses in this film, that's a blessing.
.
The longest cut of this film with the sex scenes intact is only 45 minutes. At one time the X-rated version was on a double tape with THE MAD LOVE LIFE OF A HOT VAMPIRE (which runs only 50 minutes). Both are from Las Vegas-based cult director Ray Dennis Steckler (billed under his usual porn alias "Sven Christian" here) of THE INCREDIBLY STRANGE CREATURES THAT STOPPED LIVING AND BECAME MIXED-UP ZOMBIES fame and were released by Something Weird Video.
NO STARS!
Posted by The Bloody Pit of Horror at 2:02 PM