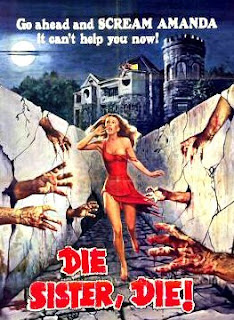 Directed by:
Randall Hood
Really a nice little surprise we have here, despite the little attention it was given and the mediocre to bad reviews I've read pretty much everywhere. Edith Atwater is the very troubled Amanda Price, a depressed, repressed old spinster who has just attempted her second unsuccessful suicide ("I'm alive... Oh damn!"), but was saved in the nick of time by the family doctor (Kent Taylor). It turns out that Amanda has an even worse enemy than herself to deal with; as her outwardly caring sibling Edward (Jack Ging) is conspiring against her in a big way. While at a bar, Ed meets Esther (Antoinette Bower), a desperate, discredited nurse now working as a waitress, who had been cheated out of a load of money when her 90-year-old sugar daddy died. Edward offers her 25,000 dollars to 'keep Amanda company' (i.e. speed along her death so he can get the inheritance) in a large mansion home full of locked cupboards and doors. Once Esther is hired on as the nurse, she inadvertently starts to appreciate and enjoy the company of the eccentric Amanda, and refuses to continue conspiring against her. But by the time she has a change of heart, she discovers that there's more than one skeleton in this families closet…and one of them is behind a cracked wall in the basement!

The screenplay (by Tony Sawyer, from a William Hersey story) has its share of unexpected twists and turns and most of the acting (especially the amusingly self-deprecating Atwater) is very good. There's also an effectively nasty flashback (which I won't spoil, but it's actually pretty shocking) and a great nightmare sequence involving birds, incest, severed limbs and a decapitation! If you don't mind slower paced thrillers, you can do much worse than this one.
★★1/2
Posted by The Bloody Pit of Horror at 7:32 PM