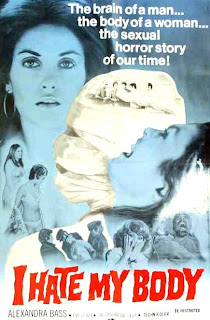 What the heck is this? The ad art proudly proclaims it's "the sexual horror story of our time!" but to me it seemed more like The Mary Tyler Show meets Frankenstein! Combining elements of basically every genre under the sun, plus a heavy dose of man-hate and dueling sexual identities makes this bizarre, amusing and hard-to-find Chilean/ Spanish/ Swiss comedy/ sci-fi/ horror/ drama well worth the search. I've actually liked everything I've seen from director León Klimovsky so far, and this may well be his most interesting concoction yet. The first 20 minutes are an unintentional comedy goldmine, due in no part to the horrendous dubbing. A playboy engineer and his swinger best friend's wife leave a disco drunk and end up getting in one of the most hilarious car accidents I've ever seen in a film as their car very gently bumps into a wall and then suddenly explodes! Both corpses are rushed off to a hospital where the guy in charge turns out to be a former Nazi who wants to apply what he learned working in concentration camps (!) to his new specimens. Thankfully the fresh corpse of a beautiful young woman named Lita Schmidt has arrived at around the same time as the car crash victims. The mad doc decides to stick the male engineer's brain into Lita's body. This leads to a power struggle between the male and female components of the new creation as he/she tries to adapt to the real world. So basically you have a man's mind trapped inside a woman's body type of set-up. I guess I'll refer to this new being as a "he" so this doesn't get even more confusing than it already is.

After Lita (played by the gorgeous Alexandra Bastedo) realizes he is basically being held prisoner in the hospital, he starts a fire, kills the doctor and then escapes and tries to reclaim his life. Lita first tries to return to the lucrative engineering job but finds the sexist boss now refuses to take him seriously, despite having all the right qualifications for the position, simply because he's now in a female's body. Lita is then forced to walk in the woman's shoes and seek less fulfilling jobs as a secretary, factory worker and at a seedy dance club where the women are expected to "entertain" the male customers. Unfortunately, Lita discovers that oversexed men are ruining all of her opportunities along the way. As we all know, men can just never keep their dirty paws off of hot women, and the men in power in this film are always trying to grope and molest poor Lita. When he doesn't cave in to their advances, he's promptly fired. The lack of employment eventually leads him to a life of crime, where he tries to blackmail his former wife into giving him half of the 1 million dollar insurance policy she collected upon his passing. Hey, it's only fair to be able to collect on your own death, right?

Though the role is primarily played by Bastedo, during the "romantic" moments the director cleverly cuts the male actor who played the engineer into the action, so the visual is of two men kissing and pawing each other. No wonder this wasn't distributed very well! On the flip side, whenever Lita tries to get intimate with a woman, the female half kicks in and makes her equally repulsed and disinterested in that person. Bastedo (who some may remember from THE BLOOD SPATTERED BRIDE or the Tyburn film THE GHOUL) looks very striking with her short haircut and traditionally masculine outfits (though the character also wears wigs and dresses to appear more feminine, depending on the job) and also gives a great performance here. The film is heavy-handed and obvious at times, plus the feminist elements are poorly dated (were things really ever this bad for women?), but there are plenty of laughs to be had here (many of them intentional), some pretty nasty scenes and even some surprisingly thoughtful and insightful moments commenting on the male/female power play, as well as a surprisingly tragic ending I didn't see coming in all. The whole film is extremely entertaining, fairly original, a lot of fun and manages to easily hold your interest throughout.

Posted by The Bloody Pit of Horror at 7:17 PM

The movie's premise is intriguing but elements in the story script leave a lot to be desired. For starters:

1. The car Ernesto was driving, explodes after crashing against a wall. This means that he and his female companion would have been totally incinerated, burned to a crisp.

2. The doctor informs his assistant that the cause of Ernesto's demise is his destroyed liver (What?). A scene shows Ernesto's feet totally devoid of any burn marks.

3. The doctor's bedside manner leaves a lot to be desired when he gleefully and cheerfully informs Ernesto of his new lease on life. No empathy for the screams of shock from Ernesto when the bandages come off and he sees not his face but that of a young woman staring back at him.

4. Ernesto's rapid recovery from the psychological trauma. Most men (and women) would not have recovered at all and if they did it would take months if not years to do so. It would be safe to say that most men would have attempted suicide than to live trapped inside a woman's body.

It would have been more believable script if instead of having the car explode, to have shown the car simply hit the wall. A critically injured Ernesto and his female companion are promptly taken to the crazy doctor's hospital. The female companion dies of brain trauma and Ernesto's deadly injuries forced the doctor to ask Ernesto's pissed off wife to authorize the transplant. The wife agrees to the transplant to get revenge on Ernesto by having him endure the worst kind of fate a macho man like Ernesto can experience, being turned into a woman. And since Ernesto is declared legally dead, she collects on the huge life insurance policy to enjoy life with her lover. Ernesto finds out that his wife was responsible for his predicament and makes it his mission to seek revenge against her. After getting his revenge, the second half of the movie would show Ernesto's attempts to come to grips with the new reality of living life as a woman. If that had been the story line, it would have made for a much better movie.