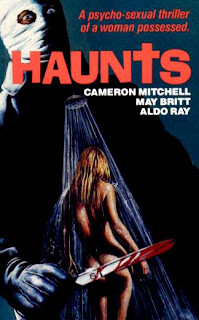 Directed by:
Herb Freed
Basically here we have an obscure, almost completely forgotten, poorly distributed and unfairly maligned low-budget regional horror film. Though the version I viewed, one of the "50 Chilling Classics" from Mill Creek Entertainment, is a seriously washed out print, this is a very interesting, and ultimately transfixing, backwoods psychological horror film and one of the few films on the entire collection that would be worth the trouble of re-mastering if you ask me. Unfortunately, it's been misleadingly packaged in the past and people wanting to see the obvious sex and violence the box promised were disappointed and the bad word of mouth spread... So let this be a warning - If you only want gore, exploitation, jump scares and nudity in your horror film, this is not your movie. 'Haunts' is a grim, slow, psychological profile along the lines of REPULSION with Swedish actress May Britt (who was briefly in the spotlight during the 1950s) as Ingrid Swenson, a lonely, frigid, religious farm girl who is generally liked by the townspeople, sings in the church choir, spends much of her time tending to her farm animals and avoids contact with members of the opposite sex. In her small town, women are being sexually assaulted and murdered (with scissors) by a masked killer and she becomes one of the main suspects when a victim's body turns up in her chicken coop. In the meantime, we get the occasional quickly-edited insight into Ingrid's very screwed up childhood. But has her traumatic past turned her into a vicious killer? Things are decidedly not what they seem here.

Cameron Mitchell, as Ingrid's elusive uncle Carl who is visiting from out of town and "keeps to himself a lot," Aldo Ray as the friendly town sheriff, William Gray Espy as the neighborhood butcher (and town stud) and others filter in and out and make for an interesting line-up of suspects. The acting is generally good and the story (conceived by the director and Anne Marisse) holds many surprises, plot twists and unexpected sick edges. Though it's flawed in spots, it emerges as a quietly disturbing and sometimes oddly moving film, aided immeasurably to Britt's strong, sympathetic, complex lead performance and Pino Donaggio's haunting score. There's also a long and surprising exposition at the end that is fairly well thought out. Now only if we could get a better-looking/sounding version of the film.
★★★
Posted by The Bloody Pit of Horror at 3:35 PM

Glad someone else appreciates this. I don't recall how I stumbled across it, but saw it on YouTube and thought it was a fine psychological thriller with a complex and sympathetic central figure.

Yep, this is an underrated little gem in my eyes but definitely not for everyone out there. I hope it gets the restoration treatment one day.