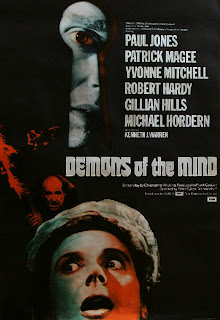 ...aka: Blood Evil
...aka: Blood Will Have Blood
...aka: Nightmare on Terror
Directed by:
Peter Sykes
Haunted by memories of driving his wife insane, mad Baron Zorn (Robert Hardy) is obsessed with the "heritage of disorder" that he thinks might afflict his two grown children, Elisabeth (Gillian Hills) and Emil (Shane Briant, in his film debut), whom he keeps locked up in his beautiful Bavarian castle home, searching for a "cure." With the help of bald manservant Klaas (Kenneth J. Warren, who played similar in several other Hammer productions) and stern aunt Hilda (Yvonne Mitchell), he drains their blood to keep them weak, forbids them to see each other (there's incest involved) and ignores the expert opinions of a doctor (played by one of my all-time favorite character actors Patrick Magee). Meanwhile, there's a rapist/murderer on the loose terrorizing a quaint neighboring village. This psychological horror story is a fine deviation from Hammer's cycle of monster movies, highlighted by excellent period costumes and sets (especially the castle) and Christopher Wicking's provocative, complex screenplay (which resembles V.C. Andrews' later novel Flowers in the Attic). Only the finale, with a mob of torch-carrying villagers hunting Hardy down a la Frankenstein, really detracts from this well above par production. Filmed in 1971, this was released the following year on a double-bill with TOWER OF EVIL (1972).

There were numerous casting problems that plagued this production. The Baron role was turned down by both Paul Scofield and James Mason before Eric Porter signed on to play it. He also backed out to take the lead role in HANDS OF THE RIPPER (also a very good film) instead and was eventually replaced by Hardy, who admittedly overdoes it a little bit here. The role of Elisabeth also had to be recast after Marianne Faithful dropped out.
★★★
Posted by The Bloody Pit of Horror at 9:11 PM

Hey, glad to see you liked Demons of the Mind. I don't hear much at all, let alone much positive about it. But I was pretty impressed. It's one of the weirdest horror movies I've seen. I didn't know what to make of it, but I did like it. Magee is always so intense he creeps me out. And Shane Briant has that sickly Romantic attractiveness that's perfect for the film. I've liked all the Peter Sykes pictures I've seen, especially House in Nightmare Pakr. He's stylish and quite clever.

Unfortunately I saw it and wrote the little snippet you see before you years ago; before I started doing more detailed reviews. I would love to rewatch this one sometime. It do remember it being offbeat, especially for Hammer and a lot of Hammer fans who post on IMDb don't seem to like it very well. Haven't seen any of Sykes' other movies but I do own THE HOUSE IN NIGHTMARE PARK and will watch it as soon as I get the chance.