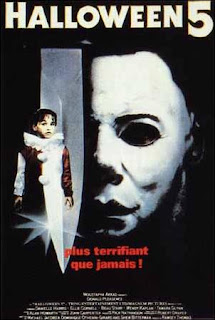 Directed by:
Dominique Othenin-Girard
Michael (played by Donald L. Shanks this time) is back for more of the same, still after his young niece (Danielle Harris), who this time has ESP powers and senses when he's about to kill; going into some kind of epileptic fit each time he does. When Michael starts to target some of her teenaged friends, Donald Pleasence returns, still ranting and raving and camping it up in his inimitable style, to put a stop to the killing spree. Ellie Cornell (as cousin Rachel) and Beau Starr (the sheriff) return from the previous entry, The director does a fairly good job adding some stylish touches to the works and, again, it's a technically well-made, well-budgeted slasher movie... But we've already seen this stuff a hundred times before so there's really no need to discuss it any great detail here.
★★
Posted by The Bloody Pit of Horror at 3:22 PM