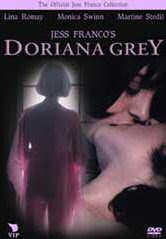 
Spoiled lesbian millionairess Doriana Grey (Lina Romay) lives a secluded, lonely existence in a huge chateau, with only her mute servant Ziros (Raymond Hardy) - who had his tongue removed - to keep her company. A women's lib journalist from New York (Monica Swinn), doing an article on "extraordinary women," shows up wanting to learn more about the mysterious Lady Grey and can't help but be put under the spell of her hostesses seductive charms (I guess she's into chicks who are sullen and hopelessly self-absorbed). Meanwhile, Doriana's insane identical twin sister (also played by Romay, of course) is kept locked away in a sanitarium where she spends the majority of her time engaging in frenzied masturbation sessions and trying to seduce people with not-so-subtle come-on lines such as "I have a valley as deep as the village well and breasts you can crack eggs on." Doriana reveals that she and her twin were actually born conjoined, but were separated soon after at birth and in the process, she lost her sexual sensitivity, while her sister lost her mind. The two also share some kind of link with one another; with the insane sister receiving all of the sexual pleasure and the other reduced to sucking the life force out of male and female victims during sex (which was about the same storyline Franco used for FEMALE VAMPIRE).

It's essentially an artsy, indulgent, explicit play on Oscar Wilde's famous horror story The Picture of Dorian Gray. Where the original story featured a man who never seemed to age while a portrait of him did, this one features a woman who can't achieve sexual pleasure while her double can. The film utilizes lots of voice-over narration to tell its story (pretentiously waxing poetic about the pitfalls of beauty and such) and runs the gamut from being boring to being unintentionally hilarious to being strangely intoxicating. It's also full of the director's trademark "style," which includes gratuitous shots of people walking directly into the camera, zooms back and forth on nearly everything (sailboats, plants, etc.), out-of-focus shots, filming the same things from different camera angles, etc. While the sex is hardcore, it's not exactly erotic. Franco really seems to do better with softer erotica, as his use of over-lighting and extreme, gynecological-level close-up shots seem to wring every last ounce of potential eroticism from his explicit sex scenes. Does anyone really want to see hair follicles and razor stubble? Then again, just because a film has graphic sex doesn't mean it was ever even intended to be erotic, which seems to be the case here. The sex scenes range from uncomfortable to labored to clinical. Though people are frequently having sex, they don't normally seem to be enjoying it. And the ones who do seem to be enjoying it are really only being set-up to have their, uh, juices drained.

Romay spends basically the entire film naked, and when she's clothed it's usually in a sheer pink dress that leaves nothing to the imagination. In a way, she's essentially playing her Irina character from Female Vampire all over again; a moody, depressed young woman who seems tired of her boring life. For what it's worth, her performance here is better than her more famous portrayal of the vampiress Irina. The rest of the cast is full of familiar faces from other Franco films, and they deserve some credit for saying their silly lines with a straight face. There's also an appearance from the Dr. Orloff character (he runs the clinic). Pretty good music score from Walter Baumgartner, including some sitar music, and the quality of the cinematography is excellent for an adult feature. With Peggy Markoff (Women Without Innocence) and Martine Stedil (Barbed Wire Dolls).