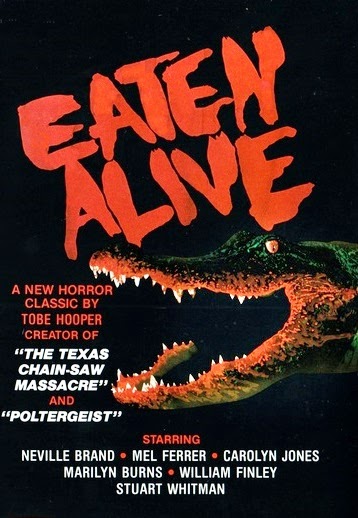 
Hooper's follow-up to The Texas Chainsaw Massacre (1974) isn't nearly as good but, let's face it, hardly anything is. Here we get scuzzy-looking veteran character actor Neville Brand (who must be seen to be believed) acting completely and utterly out of control. He seems to be on some kind of high-powered drug from outer space and you won't believe your eyes watching his twitching, maniacal psycho performance. Thankfully, his acting style is perfectly suited here, where almost every bizarre character seems to be up to something sinister or devious. Brand's character Judd operates a run-down, secluded Louisiana hotel on the Bayou where various people show up looking for an out-of-the-way place to stay. He kills many of them off (with a scythe, pitchfork, etc.) and feeds their dead bodies to his pet crocodile, who lounges around right outside the porch waiting for his grub. Drive-in queen Roberta Collins dies in a very abrupt first murder scene. Marilyn Burns, William Finley and their young daughter (Kyle Richards, from Halloween) eventually show up in disguise and are tormented by Brand. Marilyn ends up being tied to a bed and gets to scream and freak-out nearly as much as she did in TCM. Family members and cops show up looking for Collins' character (a runaway last seen working at a whorehouse) and become victims, too. Brand hacks 'em all up while hopping around uncontrollably and laughing with glee. Pretty creepy. So is Wayne Bell's music score, which is similar to the one he did for Chainsaw.

Though the high amount of shrieking gets on one's nerves (especially the little girl's), there's a sufficient amount of blood and nudity for one of these things, some genuine surprises, good art direction and sets, foggy swampland atmosphere and it's all rather colorfully photographed; almost comic book-like at times. And the cast is excellent. Aside from those already mentioned, we get Carolyn ("Morticia Addams") Jones as a the brothel madam, Stuart Whitman as the sheriff, Mel Ferrer and Crystin Sinclaire (Ruby) as the missing girl's father and sister, Janet Blythe (The Hills Have Eyes) as a local tramp and a young Robert Englund as obnoxious troublemaker Buck, who wants to... Well, you can probably guess. Not the greatest movie you'll ever see, but worth a watch.