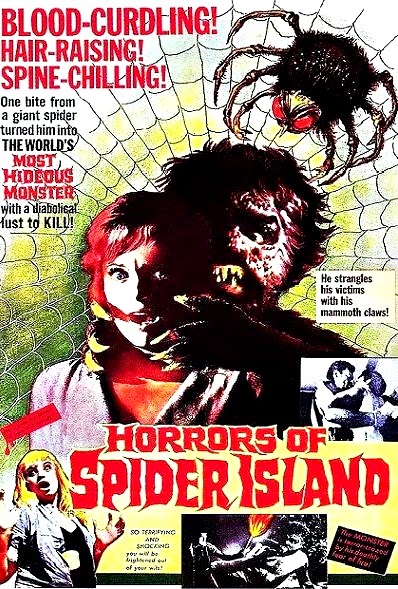 
This West German exploitation picture (filmed in Yugoslavia under the title Ein Toter hing im netz / "A Corpse Hangs in the Web") comes off like it wants to titillate and frighten in equal measure and ends up doing neither successfully. What may have worked in the 1960s as a showcase for buxom girls in various stages of undress is now just a pretty hilarious B-movie with some timid nude scenes (shot mainly at a distance), some timid horror scenes and side-splitting dubbing done by people who clearly enjoyed themselves. At the Blackwood talent agency, a dozen or so ladies show up to audition for a dance troupe in front of talent agent Mike Blackwood (Walter Faber), manager Gary Webster (Alexander D'Arcy) and his pretty assistant Georgia (Helga Franck). A girl who comes in and does an elegant ballet act isn't hired, but a stripper who auditions by walking in the door and taking off her clothes is. About seven of these "ladies," Gary and Georgia end up crashing their plane in the ocean (a crash we never get to see) while headed to Singapore and are next seen floating around on a raft. Eventually they make it to a desolate island and all eight of the women are so exhausted they immediately pass out in the sand. The next morning, they find some fresh water, walk inland a bit, locate a deserted cabin and find the dead body of a professor hanging in a giant web. The professor, they say, was there to mine uranium... all by himself... using a hammer!

Only slightly horrified by the corpse, the girls continue to fight about food, clothing, guys and everything else that bothers them (which is pretty much everything). They even slap each other in the face and get into cat-fights. Because it's a tropical island and they get so hot, most of them sleep outside on the porch in their underwear. After being seduced by the trashy Linda ("Donna Ulsike" / Elfie Wagner), Gary wanders off for a walk and encounters a Gremlin-sized spider who leaps onto his neck and bites him. He's transformed into a hairy-faced, fanged, clawed, werewolf-like monster who shows up from time to time to scare the girls and strangle one of them to death. After being on the island for almost a full month, the girls are taking a nude swim (cut from some versions of the film) when two other guys (a gigolo and a more sensitive guy looking for love) show up to deliver some whiskey to the professor. The guys manage to spark more petty jealousy and bitterness in a few of the ladies and the remaining girls fight for their affections, dress up in "island costumes" (bikinis with flowers on them) and decide to "really raise the roof!" (i.e. get drunk on the whiskey and wildly dance around). But will the dreaded spider monster make another appearance before they can be rescued?

Though primarily a girlie movie with gratuitous attention paid to showing off legs ("Let us get a look at your legs!") , there were two version of the film released - It was first out in the U.S. in 1962 as an "adult's only" feature under the name It's Hot in Paradise. The brief, tame nude scenes (which were shot from such a far distance they were nearly impossible to make out anyway) were eventually removed and the film was reissued as a horror movie under the title Horrors of Spider Island. Also in the cast are "Allen Turner" /  Rainer Brandt (a regular in those German krimi films produced during the 60s) and blonde Barbara Valentin as Babs. Spider Island has been a staple of IMDb's "Bottom 100" list for years now.