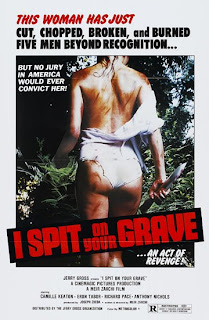 ...aka: Blood Angel
...aka: Day of the Woman
...aka: I Hate Your Guts
...aka: Rape and Revenge of Jennifer Hill
Directed by:
Meir Zarchi
When I was in elementary school, I distinctly remember certain students daring others to watch this film. I never got to see it back then, but watching it as adult (after having already seen many better-made films of this type) left me unimpressed. Maybe if I'd seen it at a younger age, it would have had more of a lasting impact on me? Camille Keaton (the great niece of Buster who'd previously been in some Italian horror films) stars as Jennifer, a writer on vacation at a secluded lakeside cabin. Four jerks show up, taunt her, harass her, attack her, beat her and rape her. All bloody and bruised, she crawls back toward her house, but when she gets there the same guys are waiting for her, and it's round two. They beat her up really badly this time and leave her for dead. Two weeks later, the still very much alive Jennifer recovers and plots to get her revenge. And boy does she ever! One of the attackers (a retarded guy) is seduced, then hung. The most famous death is the repulsive bathtub castration scene. The two others get it too (by a hatchet to the back and outboard motor to the stomach). And that's basically all she wrote.
.
You may be asking why I give this socially irredeemable movie any stars. Because, well, it's does an effective job of making the audience feel as victimized and dirty as our "heroine." Whether or not you want to feel that way is up to you. The film isn't particularly well made, there's almost no background music and some of the acting is terrible. Most videos are unrated or X (running 102 minutes), but an R rated cut (running 98 minutes) was also released. DON'T MESS WITH MY SISTER! (1985) was next up for the director.
.
A "sequel" (I SPIT ON YOUR GRAVE, TOO) was actually a no-budget camcorder-shot movie looking to cash-in. Donald Farmer's SAVAGE VENGEANCE (which was filmed in 1989 but not released until 1993) was also announced as a sequel and featured Keaton playing a character named Jennifer who also kills rapists. It was part of a video series called "I Will Dance on Your Grave" that also included the films CANNIBAL HOOKERS (1987), KILLING SPREE (1987) and W.A.R.: WOMEN AGAINST RAPE (1987).
★1/2
Posted by The Bloody Pit of Horror at 4:43 PM

Yeah, I saw it in a theater at the time of it's first release and the bath tub scene was pretty revolting!