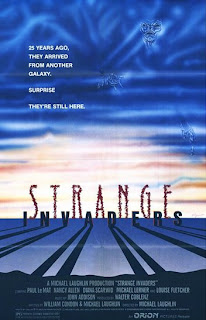 Directed by:
Michael Laughlin
Here’s a surprisingly enjoyable, fast-paced and good-natured comic spin on INVASION OF THE BODY SNATCHERS (or any one of a dozen or so other 1950s science fiction films), whose sense of humor only enhances, and does not get in the way of, the alien-invasion story. In the small town of Centerville, Illinois, a race of big-eyed, lizard-faced, green-blooded aliens have taken over the appearance of the entire populace. The comic catch is, that they've been there since the 1950s and are stuck there in both mannerism and appearance, having not caved in to the peer pressure of cultural advancement. With their mission about complete after a 25-year placement, the race plan to head back to their home planet in a couple of days. In New York City, a college entomology professor (Paul Le Mat) discovers his ex-wife (Diane Scarwid) is actually one of those aliens and their young daughter is half-alien and destined to join the rest of her extended extraterrestrial family in space. Nancy Allen is a chain-smoking tabloid reporter who becomes an alien target for using a picture of a real alien in her article Strange Invaders. She teams up with Le Mat and a silver-haired fella hiding out as a mental patient (Michael Lerner) to infiltrate the town and rescue the daughter when she's kidnapped.
.
50s sci-fi star Kenneth Tobey has one of his more notable (and sizable) roles of the 1980s as the main alien. He disguises himself as an unfriendly rooming house owner, but is able to suck victims dry by twisting his hand (the bodies shrivel up and their souls spill out in the form of glowing, floating spheres). Also along for the fun are Louise Fletcher as head of a government agency who (surprise!) actually know about the aliens and help hide their presence on Earth, Fiona Lewis, who shows up on an assassination mission dressed as the Avon lady, Wallace Shawn in a bit, June Lockhart as Le Mat's mom, Charles Lane, Dey Young and Mark Goddard. Many of them (including Fletcher and Lewis) were also in Laughlin's equally fun - but ignored - horror-comedy DEAD KIDS (1981; aka STRANGE BEHAVIOR). The casting of Lockhart and Goddard is obviously meant to bring to mind Lost in Space.
.
STRANGE INVADERS has spirited acting, fun nods to science fiction classics past and present, the right visual look and very good make-up design and visual effects. There are several ingenious ideas in the uneven, but generally entertaining, screenplay by Laughlin and Bill Condon. Worth a look.
★★★
Posted by The Bloody Pit of Horror at 10:43 PM