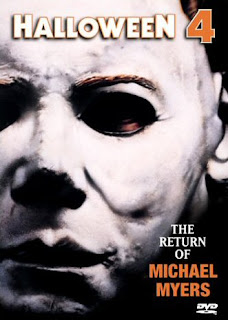 Directed by:
Dwight H. Little
Unstoppable killer Michael Myers returns (after sitting out the completely unrelated HALLOWEEN III: SEASON OF THE WITCH) to kill off his young niece Jamie (Danielle Harris) in this fairly well-made, but hopelessly cliched, sequel. As much as this is missing in originality and plot concept, it remains watchable for franchise fans thanks to decent performances, a few well timed shocks, some bloody make-up effects provided by John Carl Buechler and decent production values. Myers, played by George P. Wilbur in this outing, has a slightly redesigned mask. Donald Pleasence reprises his role as nutty, dedicated doc Sam Loomis. The cast also includes Ellie Cornell as Jamie's teenage cousin, Michael Pataki as a doctor, Kathleen Kinmont as the sheriff's daughter, Sasha Jensen, Beau Starr, Gene Ross and Raymond O'Connor. Characters are stabbed, axed, impaled with a gun through the chest and Michael sticks his hand into someone’s neck. The concluding scenes are pretty suspenseful but it all ends with a very lame set-up for Part 5. Alan Howarth took over the music score for this and the next two entries.
★★
Posted by The Bloody Pit of Horror at 3:12 PM