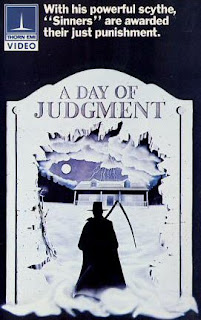 Directed by:
C.D.H. Reynolds
While exploitative, gore-and-T&A-heavy slasher flicks were all the rage on the big screen in 1981, producer Earl Owensby (i.e. "the redneck Roger Corman") and director C.D.H. Reynolds were cooking up something completely different down in North Carolina... Injecting good "moral" values into the horror genre. The result is A DAY OF JUDGMENT (1981) - where trite, country fried moralizing is served up with an extra side of low-budget regional horror cheese! Imagine an episode of Little House on the Prairie with both a preachy heavy-handed religious bent and a scythe-wielding Grim Reaper-style killer as well as other el cheapo horror delights added to the storyline and you might get an idea what this one's like. Sound good? Well, it's really not, but it did make me laugh a few times. When I wasn't rolling my eyes. It's also talky and slowwwwwww moving, but we all can't be perfect like the Big J up above, can we? For starters, I'm going to give it credit for being fairly ambitious. The film has a Depression era setting and appropriate early model cars, horse-drawn carriages and turn-of-the-century home decor and costumes. I can't attest for the authenticity of the period detail itself, but it looks about right when compared to higher-budgeted movies set during the same time period. Only cheaper. Secondly, the cast isn't too bad. The acting ranges from completely amateurish to somewhat competent, but the actors all seem to at least be trying to give performances here. Thirdly, the film has a decent score, though some of it sounds like it would be more at home at a Renaissance fair, but I still kind of liked it. And last but not least, the film does have a perspective and a message, even if said message is simple-minded and will probably be a wee bit offensive to certain viewers. Personally I was more amused than offended by any of this, even though I don't think that someone who poisons a goat deserves to pulled directly into hell, but hey, you know how some of those Southerners are. They're going to heaven and you... Well, you're just not.
.
In some small southern town, the local reverend is behind 360 dollars on taxes and forced to close the town's only church and move on. As a result, everyone naturally starts losing their way and doing "immoral" non-Christian things like drinking Scotch and forcing people to work on Sundays. However, aforementioned scythe-wielding supernatural entity Mr. Reaper pops up just in time to teach all the "sinners" the err of their ways... by sending them to an early grave and giving them cheapjack visions of red hell that may scare them back on track to having a more virtuous life.
.
There's a wealthy, racist old woman ("Old Witch Hitch") who drives away her black maid, chastises the neighborhood children and poisons a pet goat named "Doodles." Granny also likes her booze, so she must die horribly as hands emerge from her garden that pull her into the ground and spit out hellfire. Then there's a frustrated young guy who made his girlfriend go to the big city to have an abortion and then decides to ship his elderly parents off to a nuthouse instead of continuing to tend to the family service station business. He's obviously toast. Instead of being more lenient and understanding, the portly, greedy town banker forecloses on a farm that leads a financially strapped Amish costumer to suicide. A red-eyed zombie gets him. There's also an adulterous married woman who is boinking a local general store clerk who makes silly PG come-ons about "satisfying customers" and how his "stick candy" only costs a penny. After the two of them accidentally kill the woman's sugar daddy husband they are burnt to a crisp in a house fire. Finally we get some jealous redneck who wants to get back at the woman he let slip through his fingers and the new man in her life. After gunning them down, he's visited by the Reaper, who chops his head off. So as you can see, everyone gets what they deserve... or do they...
.
At the end, all of the "sinners" are shown a glimpse of heaven and a glimpse of hell. Since they had no budget, heaven is basically someone shining a spotlight in their faces while hell is red lighting, a horrible-looking matte painting and a quick flash of a skull. But wait... There's more! All of the "victims" suddenly wake in their beds from a horrible dream (groan) and now have a second chance to change their ways and become one with God. After doing so, the church is quickly reopened, everyone in town goes and a new pastor begins his sermon. How heartwarming is that? They even throw in a long bible passage right before the end credits, as if the opening overlong sermon and the final overlong sermon weren't quite enough to drill the point home. I'm convinced this was actually screened in churches, and it makes me laugh to picture a bunch of 70-year-old women shouting "Amen" at the glorious vision of a sinner's headless torso squirting blood.
.
With William T. Hicks, Harris (Robert) Bloodworth, Brownlee Davis, Careyanne Sutton, Toby Wallace, Helene Tryon, Larry Sprinkle and Jerry Rushing. Many of these actors appeared in other Owensby productions, such as WOLFMAN (1979), DOGS OF HELL (1982) and TALES OF THE THIRD DIMENSION (1984).
★1/2
Posted by The Bloody Pit of Horror at 1:16 AM