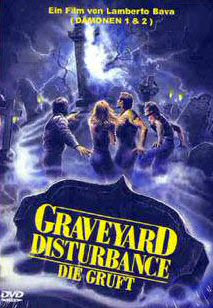 ...aka: Brivido giallo - Una notte al cimitero
...aka: Graveyard Disturbance
...aka: Gruft, Die
...aka: Outre-tombe
Directed by:
Lamberto Bava
After pulling off a supermarket job (stealing... candy bars???) and busting through a police barricade, five teens - hunky Robin (Gregory Lech Thaddeus), pretty Mikki (Beatrice Ring), her brother David (Karl Zinny), brainy Tina (Lea Martino) and their getaway driver Johnny (Gianmarco Tognazzi) end up passing through a thick blanket of fog and from then on out find themselves lost in the middle of nowhere. After getting their van stuck trying to drive over a creek, they grab their camping gear and decide to hike to the nearest town by foot. As night falls, they stumble upon a huge crumbling church where they decide to spend the night and also discover a spooky tavern located on the other side, go in and find it populated by a bunch of strange, ghoulish people with red glowing eyes. The deformed tavern keeper (Lino Salemme) promises them a treasure if they're able to survive the night in an underground catacomb of crypts located beneath the church, and like all moronic horror movie teenagers, the five take up the challenge. Yeah, like allowing yourselves to be locked up in a dark, spooky place by creepy and, from all indications, inhuman strangers is ever going to have a good outcome...

So after cracking a lame American Werewolf in London joke, down below they go, finding themselves even more lost than they were before in an Escher-style maze of staircases, ladders and various tombs and crypts. Other than encountering the expected cobwebs, gravestones, coffins, spiders and rats, there are also zombies, an animated eyeball, some kind of large wolf creature and a skull-faced Grim Reaper complete with a scythe he never uses. Unfortunately, the zombies never come off in a threatening way and are used mostly for pathetically unfunny and completely out-of-place comic scenes (such as when a male zombie grabs a female zombies boob and she slaps him) and the werewolf itself is never once shown. Boo! In fact, this entire movie, which I believe was made for Italian TV, is virtually gore free.

On the plus side, the art direction and sets are (surprisingly) quite good, and mix that with the cinematography, score and liberal use of a fog machine, and the film manages to be fairly atmospheric at times. I found myself really enjoying the first half, but soon after the teens enter the crypt, the film becomes annoying, repetitive and even more illogical than it already was. After encountering various creatures, I seriously doubt you'd be giggling, cracking jokes or even lying down to take a nap if you only have to survive until dawn. The characters are extremely annoying and do consistently stupid things, the dialogue and English-dubbing are both terrible and the tone uneasily fluctuates between being jokey to wanting to be taken seriously. A senseless twist ending drives the final nail in the coffin, relegating this potentially good film to failed opportunity status. And do they really serve Miller Beer in hell? I always kind of figured it would be Milwaukee's Best.
★★
Posted by The Bloody Pit of Horror at 11:31 PM