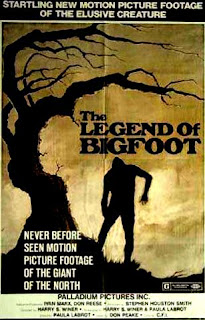 Directed by:
Harry Stuart Winer
"The film you are about to see is authentic" - Ivan Marx.
It weighs 500 pounds, is 8 feet tall, leaves behind 18-foot footprints wherever it goes and has demonic red glowing eyes. Some reports claim it's a vicious creature possessing mystical/supernatural powers that's responsible for cattle mutilations and snapping the necks of large bears. Others say it's really a large, benevolent, almost cuddly hairball with a strict vegetarian diet. Well, "that sometimes eats fish." And it's known by many names; The Oh-Man, Bush Man, Ape Man, Abominable Snowman, Sasquatch, Yeti and, yes, the most common namesake, The Big Foot. Follow geriatric Davey Crocket wannabe Ivan Marx through this "authentic" documentary as he scours the US and Canada in search of the elusive beast that strikes fear in the hearts of many a redneck. His trip takes him up and down the west coast as he takes a peak behind every other tree in such picturesque locales as the Redwood Forest, Oregon, the Yukon Territory in Canada, Alaska, California and Wyoming. Learn about the frustrations of being a professional Big Foot hunter (i.e. rain washing away tracks before you can get to them)! See 700-year-old paintings of the monster and the more contemporary artwork of Sasquatch painter extraordinaire Yukon Annie! Find out the secret ingredients that go into a "Bigfoot Burger!" But most of all, see how many times the movie veers completely off course because they are seriously lacking in booga-booga footage, information and/or interviews with delusional white trash who've claimed to have really seen Mr. Yeti Man.
I'm not quite sure what bearing witness to the moose mating ritual has to do with Big Foot, but for some reason they chose to include it here. Whoa. Wait a second! Now that I'm thinking about it, what do caribou, oxen, goat, deer, birds, spiders, frogs, beavers, bears, raccoons, mountain lions, coyotes, salmon and owls (all of which get mucho screen time here) have to do with Big Foot? About as much as the segment about "ground squirrels in love" on what they call "God's Earth;" one of which is savagely run over by a car and limps back into its hole... Well, I don't want to follow the lead of the filmmakers and our rambling narrator / host by getting completely off topic to pad out this review...
But most of all, this seems to be a celebration of Ivan Marx the man... the myth... the legend. He goes beyond the call of duty to convince us he is a legendary adventurer. A true mountain man. Expert tracker. Maverick explorer. Nature expert. King of the outdoorsman. And while he's busy tooting his own bugle, you'll be busy taking a nap. It's all fairly harmless, I guess, but not really all that informative. Ivan even drags his wife Peg along on some of his duller-than- dishwater narrated home movie adventures, though she tries her best to keep herself off camera. There are a few pluses; namely travelogue footage. It's borderline charming in its simplicity at times and has some OK nature photography, but you can get better-looking footage without the self-congratulatory track by tuning in to National Geographic or The Travel Channel on any given day.
And before I forget, strategically place at the very end is what we've finally come to see: Marx's supposed "authentic" Big Foot footage, which is basically a minute or two's worth of a hairy monster (i.e. man in a furry suit) cavorting in the woods, naturally shot from a far distance, or as he likes to call it "unchallengeable proof" of the creature's existence. Somehow it failed to make me a believer.
★1/2
Posted by The Bloody Pit of Horror at 4:27 AM