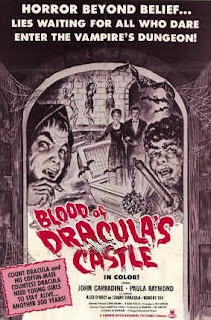 ...aka Castle of Dracula
...aka Dracula's Castle
Directed by:
Al Adamson
Considered the worst vampire movie ever made by many (nah!), this Al Adamson bomb is nonetheless chock full of laughs and tacky entertainment value. Mr. and Mrs. Dracula (Egyptian born schlock star Alexander D'Arcy and Paula Raymond) disguise themselves as the Count and Countess Townsend and are living it up in Falcon Rock; renting a secluded castle located in the middle of what appears to be a desert (a great place to avoid the sunlight, eh?). The castle comes complete with the usuals... lavish rooms, coffin-filled bedroom chamber, candles, a large dungeon, a pool table (?!) and two faithful employees who have to do all the dirty work as the bloodsucking duo lounge around spouting their insipid dialog. The two servants are a hulking, facially-scarred, hunchback retard named Mango (Ray Young) and a slack-eyed butler named George (John Carradine), who worships the "great God Luna." Mango kidnaps beautiful girls (because, of course, the blood of 'beautiful young women' always tastes the best), takes them to the dungeon and chains them to the wall as a sort-of personal live-in blood bank. George uses a huge syringe to extract blood from victims and serves it up as cocktails to Dracula and wife.
The most recent addition to the harem is Ann (Vicki Volante, a star of many other Adamson movies), who has a bad habit of passing out whenever the going gets tough... a problem that got her dumb ass abducted in the first damn place. She screams her head off when a rat gets within ten feet of her, has a tarantula crawl on her dress and may end up being the chief sacrifice to Carradine's Moon Cult (yes, there is also some kind of black magic mumbo jumbo going on here). There are a few other prisoners as well; two or three other ladies in ripped-up dresses whose expressions never change despite what is going on around them. When one of those ladies is all used up, Mango is given permission to drag her off into a dark corner of the dungeon (hmm... For what, I wonder?) This comfy living situation is threatened when the owner of the castle dies, leaving the place to a favorite nephew (Gene O'Shane), who wants to boot them out and move in there with his fast-track fiancé Liz Arden ("Barbara"/Jennifer Bishop). Liz is a model and aspiring "Universal Magazine" cover girl, who will end up having more problems to deal with than being upstaged in her saggy bikini bottoms by dolphins, seals and a flipper-chewing walrus while at Sea World.
.
And as if that isn't enough... There's this family friend named Johnny Davenport (Robert Dix), who has just bought his way out of prison. Get this... A guard accepts five thousand dollars to let Johnny out. But to make it look more convincing, the guard actually turns around and allows this convicted mass murderer to knock him unconscious! So, not surprisingly, instead of just laying him out, Johnny just beats the guy to death before taking off! Before making it to the castle, Johnny has a fun-filled day of murder and mayhem. He's chased by a posse with dogs, drowns a woman in a polka-dot bikini under a waterfall, bashes an old man over the head with a rock, shoots a hitchhiker in the face with a rifle and wrecks a stolen car over a cliff. There is mention of Johnny being a werewolf, but there are no make-up effects to convey it.
When Liz and Glen arrive at the castle, they sleep in separate bedrooms. And when she hears one of the women downstairs screaming, he comforts her by saying "I think it's probably someone using an electric tooth brush that just got short circuited." (??) After an encounter with Mango, the two find themselves prisoners in the dungeon as well, but they manage to escape after being forced to perform in a black magic ceremony. During a struggle with Johnny over the gun, Glen aims the gun way off target, but ends up pulling the trigger and shooting Johnny in the stomach. Carradine falls down a flight of stairs and attacks with a whip. Will Liz, Glen and the imprisoned lovelies escape with their lives? Does this entire film seem like an odd extended dirty metaphor for the joys of S&M? Also in the cast are future director John "Bud" Cardos (who was also the production manager) and Ken/Kenny/Kent Osborne (who also did the make-up). It was shot by "Leslie" (Lazslo) Kovacs, who also worked with Ray Dennis Steckler before becoming a respected Hollywood cinematographer, so you know this movie looks pretty good. Gil Bernal performs the non-hit single "The Next Train Out." I've seen the production year on this film frequently listed as 1967, but according to the original credits it is 1969.
So yeah, not the "worst vampire movie ever made..." Bad, but pretty fun schlock.
★1/2
Posted by The Bloody Pit of Horror at 8:56 AM