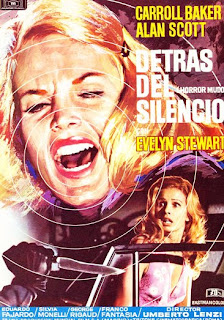 
Carroll Baker continues her long streak of Euro exploitation/horror flicks with this typically convoluted Spanish/Italian giallo from director Umberto Lenzi, who had previously directed the actress in three films in the same genre - ORGASMO/PARANOIA (1968), A QUIET PLACE TO KILL (1969) and SO SWEET... SO PERVERSE (1969). Unfortunately, the film isn't particularly stylish, much of the dialogue is downright atrocious, the played-out plot line offers next to nothing of interest and the pacing is lethargic. It tries to function as a murder-mystery and even throws in some sloppy and confusing flashbacks (that ultimately are pointless), but gives absolutely no clue as to who the killer actually is when it's revealed; just another "let's pull this out of a hat" type of revelation that personally irritates me. In addition to being trite, unfocused and unoriginal, the film is sorely lacking in exploitation elements that could have helped make it more watchable. There's no gore (all of the murders are off-screen), no sex, no nudity, no notable kill scenes and almost no suspense to speak of. Combine that with a lousy screenplay and anonymous direction and you have a film that isn't going to appeal to anyone other than the most dedicated of giallo fans. And that's really too bad, as it's a handsomely photographed production set in some beautiful looking, foggy Spanish village. Now I do appreciate the picturesque outdoor Spanish locales sometimes used in this film, but when it fails at basically everything else, it's hard to recommend it for a few scenic shots of a place you'd like to take a vacation.

Baker stars as Martha Caldwell, a woman who saw her parents die in a train wreck when she was a teen and has been mute every since that traumatic event fifteen years ago. She has to overcome her fears to meet her attractive professional singer cousin Jenny Ascot ("Evelyn Stewart"/Ida Galli), who's just arrived in town for a visit, at a train station. The two go back to the country manor that Martha shares with her uncle Ralph (George Rigaud), who has an interest in demonology and the occult. Later, they throw a birthday party for a young girl in the village. Jenny is stabbed to death in the garage and her body is hidden under a car later that night. Martha discovers it the next day and the police are soon doing their usual investigation. Turns out another young woman had been murdered not too long ago and her body was tossed in a ditch. The police think there may be a sex killer on the loose, but they also realize that whoever murdered Jenny had to be one of the party guests because a security system would have prevented it. Well, unless someone else happened to sneak in... You know, such as a homeless, long-haired, trench-coat-wearing, morphine-addicted devil-worshipping hippie who apparently borrowed the same contact lenses worn by Ivan Rassimov in ALL THE COLORS OF THE DARK and seems to pop up out of nowhere at all the right incriminating moments. Since he's obviously filling the too-obvious red herring position, let's get back to the real suspects in this case...

So who was at the party that could have killed Jenny? Let's see... Aside from Martha, her uncle and the little girl, there's Martha's doctor (oh-so-bland Alan Scott), an exotic looking female acquaintance (Silvia Monelli), a sinister chauffeur (Eduardo Fajarado), a maid (Olga Gherardi) and a priest (José Marco). Which one is responsible? There's also a heavy concentration on things having to do with Satanism. The Uncle is obsessed with it (and seems to have chosen his house because it's located next to an old cemetery), one of the flashbacks is of Jenny buying an occult book, the hippie wears a goat head necklace and is a Satanist and there's a goat head painted on a tree in blood at one of the murder scenes... And all that really has nothing to do with the storyline whatsoever, doesn't play into any motive and seems to have been added almost as an afterthought. There's also a bullfighting scene repeated endlessly, a dead kitten, some truly inept police procedural (only some of which can be explained by the finale), a Snoopy necklace and a cool Donald Duck electronic toy. That last thing was probably my favorite bit in the entire movie.

Baker's performance is decent. Rest of the cast (also including horror and giallo regular Franco Fantasia as the detective on the case) is so-so. The music score is fair, but not memorable in the least. Kind of like the rest of this film. The version I saw was under the title KNIFE OF ICE and is a good-looking, dubbed, widescreen print.