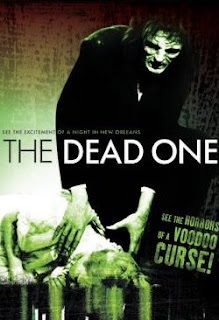 ...aka Blood of the Zombie

Directed by:
Barry Mahon
Barry Mahon's once-believed "missing" low-budget zombie flick THE DEAD ONE was found a few years back and put on DVD by both Stax Entertainment (under its original title) and Shriek Show/Media Blasters (under the title BLOOD OF THE ZOMBIE). It's certainly nice to see something of historic interest (a rare, pre-NIGHT OF THE LIVING DEAD 60's zombie flick) now available to the masses. Unfortunately, this unearthed relic is a dull, slow and disappointingly uneventful little film. During a brief opening sequence, a blonde priestess uses voodoo to resurrect a long-haired corpse named Brother Jonas and orders him to "Kill! Kill! Kill! Kill!" Then we meet John Carlton (John MacKay) and his new bride Linda (Linda Ormond) just as they are leaving the wedding chapel and heading out on their honeymoon. The two decide to spend their first night of married bliss on Bourbon Street in New Orleans, where at least 20 minutes are spent on things that have absolutely nothing to do with zombies, blood or "dead ones." There's a long sequence of a belly dancer doing her act at "The Dream Room," along with two different jazz/blues bands (The Joe Burton Trio and The Joe Jones Orchestra) performing songs. Finally, Joe and Linda head out toward their new home; a former slave plantation/mansion called Kenlworth, that he's just inherited from his grandfather. On the way there, they find the belly dancer from the club (Darlene Myrick) stranded alongside of the road and decide to let her come along and stay at their place until she can get her car fixed.

Upon arriving at Kenlworth, John, Linda and Bella Bella (yes, that's the belly dancer's name) are coldly greeted by John's bitchy cousin Monica (Monica Davis), who is pissed off about them moving in on what she considers her territory. You'll also recall Monica from the opening sequence; she's the lady summoning the zombie. Now you know why - She wants it to kill Linda, even though she and her hubby make it clear that they have no problem with her also staying there. I also have no idea why Monica lets John off the hook and only seems to want Linda dead, but some things are better left to the imagination, I guess. There are also a bunch of cliched superstitious black men and women lurking about outside. After all, someone needs to beat the bongos, chant and hold torches while Monica screeches her silly dialogue ("Killllll!") during the voodoo ceremonies. The plantation is but a few interior sets, plus a sparsely decorated family tomb (where Jonas resides during the day) and an old slave's quarters sporting voodoo idols and chains on the walls ("You mean they kept them chained up like dogs? Gee, that must have been awful!")

Monica sends Jonas after Linda, but he accidentally kills Bella Bella instead. When they find her lifeless stripper corpse lying on the front lawn, John solemnly notes "She's dead" to which his blushing bride responds "But can't we help her?" During the stirring (not really) climax, Linda ends up trying to hold off the zombie fiend with a pistol, while John crashes the voodoo ceremony and tries stop the madness once and for all. Oh yeah, and for some reason Jonas must return to his musty crypt before the sun rises or he'll evaporate. I guess voodoo just brings out the, uh, vampire in him (?)

The plot itself is passable, but barely enough to sustain a feature film. In fact, if you discount the utterly pointless first 20-25 minutes set on Bourbon Street, it's actually not enough to sustain it, so this film has a serious case of the drags throughout. The acting is mostly awful (especially the women), the dialogue is laughable, very little atmosphere is generated despite the setting and it's both extremely slow-moving and utterly empty (content wise) for a movie that clocks in at less than an hour. One of the only things this really has going for it is the Jonas zombie design, which is surprisingly effective. Too bad we don't really see much of creepy ole Jonas. That's partially because he doesn't have many scenes, but mostly because nearly every shot in this film is a long master shot. The camera never really leaves the tripod on this one, and there are almost no close-ups in the entire film. Actually, I don't recall a single close-up. Hell, there aren't even any zooms. There's also a surprising lack of exploitation considering this is from legendary 'nudie' director Barry Mahon. It's not only flesh-free, but also violence free (bloodless gunshot wounds and the lone zombie victim passes out, is scooped up, carried away and is later just shown dead).

If you pick up the Shriek Show DVD, you'll also be treated to the additional feature VOODOO SWAMP (1962), which is so awful and painfully boring it almost makes this one look good by comparison. Almost.
★1/2
Posted by The Bloody Pit of Horror at 5:01 AM