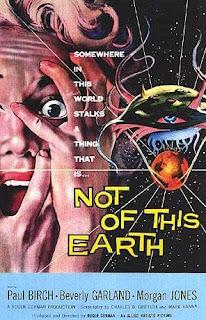 
Sunglasses-sporting Paul Johnson (Paul Birch) stops in at a clinic one afternoon and demands an immediate blood transfusion, and he doesn't seem too concerned about pesky things like blood type, RH factors and other peculiarities getting in his way of obtaining his blood. After slitting his own wrist to show he's tapped out and using his telepathic abilities to put Dr. Rochelle (William Roerick) under a trance, Mr. Johnson not only gets the red stuff he wanted but also the employ of the doctor's nurse Nadine Story (Beverly Garland, who had just appeared in Corman's hit IT CONQUERED THE WORLD a year earlier). Nadine is sent off to live in Johnson's home so she can administer daily blood transfusions and finally comes to the realization that her new patient is, well, not of this Earth! Mr. Johnson is actually a black-eyed alien being from the planet of Davanna, where the population is so exposed to nuclear war that their blood has begun to evaporate. He's on Earth to harvest blood from unwilling donors using a special pump with clear tubes and then sends it, as well as live human specimens, back to his home planet through a special portal. Not only adept at mind control, Johnson can make anyone drop dead with direct eye contact. Also living in the home is a small time crook/punk named Jeremy (LITTLE SHOP OF HORRORS star Jonathan Haze), who acts as chauffeur, security and errand boy. Jeremy takes an instant liking to Nadine, though she's already seeing motorcycle cop Harry (Morgan Jones), and the two team up to try to find out what's up with their strange new employer.

Corman does his usual workman-like job here; making the most of a low budget from the first frame to the last. The screenplay by Charles B. Griffith and Mark Hanna is wonderfully imaginative; full of interesting ideas and concepts that don't need a huge budget to pull off. It also has its share of amusing, sometimes hilariously droll one-liners. The casting is also terrific. Birch is amusingly and appropriately one-note as the seemingly emotionless alien being, Garland is a plucky and enthusiastic heroine and all of the other principal actors deliver competent performances. "Richard" (Dick) Miller even gets a funny cameo as an ill-fated door-to-door vacuum cleaner salesman who ends up in the downstairs furnace. Special effects man Paul Blaisdell contributes a bloodsucking umbrella monster to the proceedings, but it only gets to appear in one scene. All in all, this is a clever, breezy, humorous and highly enjoyable way to spend an hour of your time. Unfortunately, it's never officially been released to video or DVD to my knowledge (at least in America) and is hard to track down nowadays. Hopefully one day it will get a decent release and build up a strong cult reputation like it deserves.