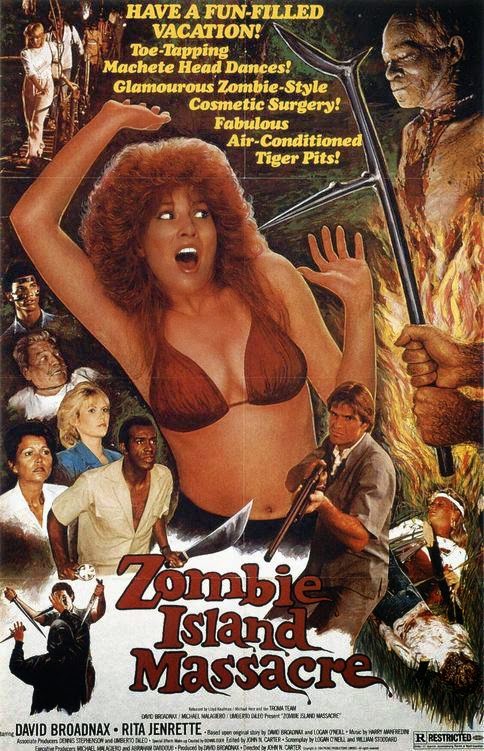 
Where da zombies at?! Well they must have taken a wrong turn in Haiti and ended up in Hoboken cause this movie sure don't have 'em. Still, it's not the end of the world as far as low-budget exploitation goes, even though the title is a notorious cheat that has been pissing off people for at least twenty years now. But if you know going in not to expect to see flesh-munching living dead crawling out of their graves, you might find this dumb concoction mildly entertaining. Hey, it does have its charming elements, one of which is undoubtedly lead "actress" Rita Jenrette. In case you're not up on your history, Rita was the wife of former South Carolina congressman John Jenrette and saw her husband jailed after being convicted of accepting a 50,000 bribe during the Abscam sting operation conducted by the FBI in 1980. Afterward, Rita made rounds on the talk show circuit, wrote a best-selling tell-all called My Capitol Secrets, posed nude for Playboy magazine, attempted to have a country music singing career by releasing a single and tried to ignite a feature film career by appearing in such turkeys as The Malibu Bikini Shop and this low-budget horror flick.

The good news is that Rita is enthusiastic, sort of fun to watch and bears her considerable assets no less than three different times; in the shower, on a bed and below deck on a boat, in the first 10 minutes alone! In other words, while she's far from being a great actress, Ms. Jenrette is worth her weight in entertainment value, whether scrubbing down in the shower or running around the island in hysterics with her short shorts pulled up to her armpits. In addition, she also sings the theme song ("Di Reggae Picnic"), which is actually a pretty catchy little Caribbean-flavored song.

Things start at some resort in the Caribbean, where a slew of people get ready to take a tour boat to the remote island of San Marie. Among the tourists are the unlikely couple of tubby, balding Joe (Ian McMillan) and blonde, voluptuous Sandy (guess who?). The other principals are adventure seeker Steve (Tom Cantrell), photographer Paul (David Broadnax, who also wrote the screenplay) and painter Connie (Diane Clayre Holub). The rest (a bickering elderly couple, a middle aged couple, a pair of comic relief stoners and a pair of newlyweds) are what we like to call "cannon fodder." The group takes a boat to the island, then take a tour bus deep into the jungle where they witness the natives raising a corpse with a chant, a dance and some fresh goat's blood. Sadly, it's the only zombie you will see in this flick and it doesn't really do anything but grow out its fingernails and sit up.

The young newlyweds sneak off for some hot jungle lovin' and are beat over the head with a club. Everyone else goes back to the bus and find it's not running because someone has tampered with it. The tour guide then goes to get help, but doesn't come back. Now everyone else is stranded out in the middle of nowhere with no sign of help coming, so they decide to hike to the nearest home. Before they even get there, all of the disposable characters have been killed off by either booby traps or natives dressed in foliage. And no, they are not zombies, just people with some leaves glued to them.

The five survivors of the trip; Joe, Sandy, Steve, Paul and Connie end up at a remote house and face additional horrors as natives try to get in and kill them. They devise a plan to protect themselves and, after a few of the characters bite it, there's a surprise twist to the story involving cocaine smuggling (don't ask). Some of the dialogue is unintentionally funny, there's a weird, out-of-place flashback narrated by Rita, music by Harry Manfredini that sounds like outtakes from his Friday the 13th score and unfortunately not much in the way of gore (though there's a decapitation that's fairly well done). The body count is pretty high and it does capture a sense of survivalist movie fun if you don't take it too seriously. There's decent scenery too and the acting isn't all terrible, especially an utterly charming performance from Dennis Stephenson as Reginald the tour guide.