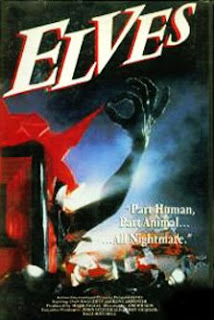 
This isn't a good film, but it's a pretty good bad film. Troubled blonde teen Kirsten (Julie Austin) has a horrible home life that rivals just about everything Linda Blair went through in her 1970s film adventures. Her dad is out of the picture (or so she thinks). Her mother (Deanna Lund, of "Land of the Giants" fame) is an icy mega-bitch whose idea of punishment is tapping into her daughter's savings account. Her kid brother Willy (Christopher Graham) is an obnoxious perv who likes to look at her boobies. Her German grandfather (Borah Silver) is a wheelchair bound weirdo who slaps her around for staying out too late. Needless to say, Kirsten is having a hard time getting into the holiday spirit. On top of all that, she's having these strange dreams which have something to do with some book or her family lineage or a drawing she made. It's all rather muddled and hard to understand. Kirsten, along with her bimbette friends Brooke (Laura Lichstein) and Amy (Stacey Dye), decide to hold some sort of séance out in the middle of the woods. Before they can even get started, Kirsten cuts her hand on a busted glass candle. Blood gets on the ground, the girls leave and out pops a rubbery elf monster! Not elves. An elf. Just one of them. Don't expect GREMLIN like monsters running around killing everyone despite the title.


Kirsten works at a department store. It's Christmastime and her boss is being a jerk. He threatens to fire her after she knocks out the guy playing Santa for trying to feel her up. The elf sneaks into the store and kills the mean Santa by stabbing him in the crotch about 10 times with a knife. Police show up and basically do nothing. Homeless, out of work former store detective Mike McGavin (Dan Haggerty) is hired on to replace the dead Santa. Despite the mysterious murder and a mad killer still on the loose who was just there earlier that day, Kirsten, Brooke and Amy decide to have a secret slumber party after hours in the store. They invite three guys over (who never make it inside), put on make-up, try on ugly lingerie, decide what tents they want to boff their boy toys in and end up getting attacked by both the elf AND some heavily armed posse of mystery men who somehow know all about what's going on. Only Kirsten and Mike end up getting out of the store alive, but there's more fun in store for young Kristen when she gets home.


As it turns out, Kirsten is of a rather special bloodline. The Nazis are after her because they know she is the key to reviving the "Master Race." They know that only a virgin who is the bi-product of father-daughter incest is suitable to mate with an elf to bring on the second coming of the Third Reich. Will the rubbery elf fiend be able to wine, dine and consummate its relationship with Kirsten? Does Kirsten now wish she'd given it up to her mullet-sporting suitor in the home improvements section earlier in the film? See what happens when you save yourself for marriage, ladies. Tragic consequences always ensue. You'll either get a lot of innocent people killed because cannibals want to sacrifice you or you'll get lots of innocent people killed because elves want to mate with you to create Nazis.


In addition to the wacky plot, this one has lots of profanity, lots of bad taste, lots of bad acting, lots of quotable terrible dialogue, lots of hideous 80s hair and clothes, a little gore and even some nudity, most of which is provided by the evil mother character when she gets electrocuted in the bathtub when the elf throws a radio in. It's all pretty awful, yet entertaining nonetheless.


SBIG
Posted by The Bloody Pit of Horror at 3:52 AM