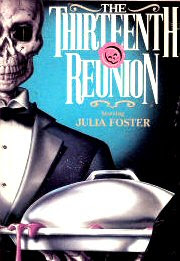 I've decided to include all thirteen episodes from the short-lived TV series "Hammer House of Horror" on this website. There are two reasons for this: 1.) Each episode runs 50 minutes and is in essence a feature (short films technically clock in at less than 45 minutes). 2.) More importantly, in the mid-1980s each episode was released separately on video by the ThrillerVideo label and was further padded with commentary from horror hostess Elvira. Since these were very well distributed titles, and in keeping with the video-store feel of the website, I felt it important to keep these titles in the database and review them all individually.


The second aired episode of the series is a winning combination of black comedy, social satire and horror. Dowdy reporter Ruth (Julia Foster) is sick of working on stories about furniture and fashion for the women's page of a publication, so her editor (Dinah Sheridan) sets her up to go undercover at a weight loss facility after some complaints. On her first day there, Ruth discovers the unorthodox techniques to get people to lose weight include degradation, humiliation and completely breaking down the person's self esteem. She also meets a guy there who strikes her fancy. Too bad he's dead the very next after a car "accident." Ruth begins getting suspicious and, with help from an equally suspicious mortician (Gerard Kelly) who has noticed some strange behavior from those at the clinic, begins investigating. What they discover is best left obscure by me, but let's just say it includes grave robbing and a reunion of people at a mansion who all managed to survive a plane crash.

Well written by Jeremy Burnham, this has several good twists, some insightful dialogue, funny jabs at silly societal trends, black comic moments, a gradual building of suspense and a fairly surprising ending (though the very last scene could have used a bit more oomph). Foster is terrific in the lead role and there are effective turns from Richard Pearson as the owner of the clinic, James Cosmo as an obnoxious fitness guru and pretty much the rest of the entire cast.