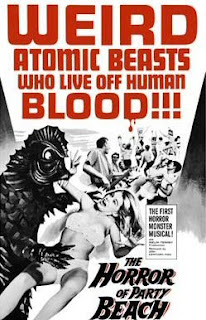 Directed by:
Del Tenney
As far as "bad" movies go, one of the all-time greats is this relentlessly hilarious cautionary tale that mixes your typical BEACH PARTY-style 60s teen comedy with the "horrifying" killing rampage of radiation-spawned monsters. Your typical bunch of Frankie and Annette clones spend carefree days on a Connecticut beach dancing, swimming and sunbathing until their fun is ruined by several monsters that are the after effect of atomic chemicals being carelessly dumped into the ocean. It takes a little while to get to the action, though. First you need to learn why this was billed as "The First Horror Musical!" The opening fifteen minutes are set aside as a showcase for the band The Del-Aires; who perform numerous songs, including "Drag," "Wigglin' Wobblin'" and everyone's favorite horror tune "The Zombie Stomp" as a bunch of sun-baked "teens" showcase some truly horrendous 60's dance moves. There's a small 'human' story here about a guy named Hank (John Scott), who's dating a loose girl named Tina (Marilyn Clarke) who'd rather gyrate on the sand with the leader of a bunch of greasers than pay her boyfriend any mind. As everyone does their thang, Tina sneaks off for a swim and is mauled to death by one of the creatures. After her corpse washes up on the beach and causes a panic, nice girl Elaine (Alice Lyon, who must have been a truly horrendous actress because she is the only person in this film who is dubbed) decides it's as good a time as any to make her move on Hank.

Elaine's daddy (Allan Laurel) just so happens to be the scientist searching for a way to destroy the creatures. As her tinkers around with his shoddy looking lab equipment, the monsters continue to do their thang by attacking and killing "over 20" college girls at a slumber party, taking out three more hot-blooded tootsies passing through town and attacking whoever else happens to be stupid enough to go out at night. Before long they've claimed hundreds of local victims (well that's what they tell us, we don't exactly get to see much of it...) Poor Eulabelle Moore, clearly the best actress in the film, is saddled with a racist, stereotyped role as the scientist's sassy, fraidy-cat maid who thinks "the voodoo" is responsible for creating the monster. However, by an act of sheer clumsiness, Eulabelle becomes the hero by helping the scientists discover how to stop the vicious sub-CREATURE FROM THE BLACK LAGOON beings.

Yes, this one lives up to its reputation as one of the worst movies of all time. The dialogue and acting are out-of-this-world bad, the seaweed-covered monster costumes are tacky in the extreme, some of the songs are cool, it's pretty hilarious and upbeat, and there are even a few early, primitive attempts at gore. A lot of the newer fans saw this being ridiculed on a popular episode of MST3K. Writer Richard L. Hilliard has previously collaborated with the director on 1963's PSYCHOMANIA. The DVD from Dark Sky pairs this with CURSE OF THE LIVING CORPSE and features an interview with the director.
SBIG
Posted by The Bloody Pit of Horror at 4:19 AM

Bad but too much fun to pass up, I totally agree!