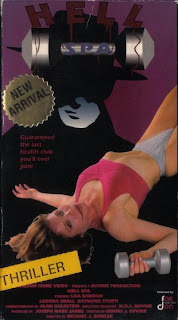 
I went into this expecting to laugh my ass off at a cheap, tacky, shot-on-video slasher flick set in or around a health club / spa. It even comes in a laughable video box that looks like it was designed by an eight-year-old, with poorly stenciled, blood-dripping lettering for "Hell" followed by an equally childish looking drawing of a barbell reading "Spa" right below. Hey, that's the mark of Raedon quality for ya. Instead, what I got was something much more serious-minded and ambitious than that. Not that this film is perfect. Far from it. It's very limited in its budget and tries to accomplish too much with too little. However, I ultimately ended up sort of liking this one because you can tell that both the filmmakers and the actors took it seriously and actually tried their best. I can see pinches of both David Cronenberg and Larry Cohen in the plot at times. Not that the end results even come close to the films of either of those two directors, but I still appreciate the effort.

A middle-aged woman is pursued by a shadowy figure who warns "You can never leave us" before killing her. On a primitive computer screen we then learn that the woman is part of some kind of strange organization whose members face dire consequences if they try to quit. The computer also spits out the names of the victim's daughters; Maggie and Marcia, a couple of college students who must also be "terminated" to eliminate any kind of incriminating evidence. We soon find out that the murderer - a tall, good-looking, pale-faced man dressed in black pants, a black top hat, black gloves and a black trench coat - is named Mr. Ex. Mr. Ex has been busy funneling money into failing local businesses, which miraculously seem to improve once he becomes involved. The owners of the dying businesses also seem to suddenly become much healthier and younger looking as a result... Who or what is Mr. Ex? Is he a vampire? An alien? A demon? A ghost? An ageless puppet master? Satan himself? It's hard to tell, but the fact the movie keeps that character completely ambiguous actually works in its favor.

Ex's next target is a small health club that's about to be shut down. Distraught, club owner Rona Benson (Deirdre West) takes up Ex's offer to loan her money to fix her place up so she can compete with a larger gym in the area. Soon enough, people are flocking to her establishment to try out a guaranteed weight loss program called "Plan Ex," which promises to make you lose weight or you don't have to pay. Sounds too good to be true... and it is. Meanwhile at a local print shop, struggling newspaper editor/reporter Catherine Clark (Lisa Bawdon) gets thrust into the middle of things when her friends, the aforementioned Maggie and Marcia, disappear. She and two of her co-workers; plucky, pudgy reporter Doyle Shakespeare (Leonna Small) and musclebound computer expert Ken Brock (Raymond Storti), as well as print shop owner Roque Jarvis (Augie Blunt), end up getting involved. When Doyle and Ken turn up missing, and several people who tried to help her turn up dead, Cathy decides to break into Mr. Ex's corporate headquarters to get to the bottom of things.

Even though I didn't expect this film to even have a plot, it did. And even more surprisingly, the plot managed to keep my attention for the most part. I felt that the lead actors did a surprisingly good job, and the characters they played were relatively appealing. Lead actress Bawdon was decent enough, and West and Small were both great. "Ron Waldron" is credited as playing Mr. X. "Waldron" is actually an actor by the name of Tim Abell, who I recognize from many Fred Olen Ray movies. He does a pretty effective job as well. The movie also has some fun, clever touches, such as a commercial for the new and improved health club that's constantly playing on TV's.

Some parts don't really work, though. Cathy tries to get help from the authorities, but the detective doesn't believe her and seems too busy trying to cut an apple using a medieval axe (?!) The next time she pops in, there's plastic covering the floor. He says his office is going to be re-painted, but I instantly knew the filmmakers didn't want get blood on the carpet of probably "borrowed" space for an upcoming death scene. Hilarious! There's also some goofy dialogue at times. One girl claims she's on the "San Francisco Diet," which is "all fruit." Har har har. And who could forget the infamous line "There's something out there... and it took my beans!" The film is also a little too long; clocking in just ten minutes short of the two hour mark, and I'm sure some people out there will find it too talky and not exploitative enough. There's only a tiny bit of T&A during a brief shower scene, and not much gore either; though one poor guy gets his finger hacked off with an electric carving knife just for eating a candy bar at one point!

Written by Dennis Devine (who made the above average slasher DEAD GIRLS around this same time), this saw a second release in 2000 under the title Club Dead, which supposedly has new footage added to it. And now I just need to watch Aerobicide... and then Death Spa... Maybe throw in some Dance of Die... Don't you just love the 80s?