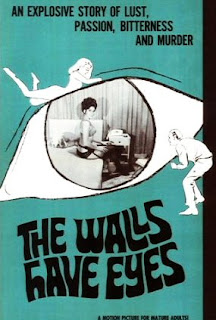 
This 55-minute "skin noir" masterwork - also available in a shortened 28-minute version - features legendary muscle-head Steve Hawkes of BLOOD FREAK (1971) fame in his triumphant feature debut full of chills, thrills, spills, canned music, trend-setting landing strip hair-dos, bad post sync dialogue and continuity errors. Before playing Herschel the pot-addicted turkey monster or 'Zan of the Jungle, Steve played brutish boxer Jack Owens. First seen laying into a punching bag and beating up four punks in an alleyway, Jack is so brutish that even our friendly narrator predicts he'll be the hero about thirty seconds into the film. He's just that kind of guy. Professional stripper Jody Baby also puts in an award-worthy performance as Connie Martin, a wealthy nympho who becomes so distracted shooting up dope and massaging her breasts in front of a two-way mirror she doesn't even notice the pervert motel manager (Bill Henry) standing behind it photographing her! Through a magical technique never before seen on screen, the manager is able to stand in just one location yet get footage both in front of and behind Connie, as well as close-ups and high camera angles looking down upon her as she thrashes around on bed licking her lips. During the heart-stopping climax the ruthless manager lures nubile young Connie back to the hotel to show her his footage of her motel romp. She's aghast when she discovers she was photographed without her knowledge. I mean, the lighting conditions are totally unflattering and it was so dark she had no idea she just screwed the love child of Sylvester Stallone and Elvis Presley. And now the guy wants five thousand dollars? The horror! Can Jack get there in time to beat some sense into the blackmailing creep? I guess you'll just have to watch to find out.