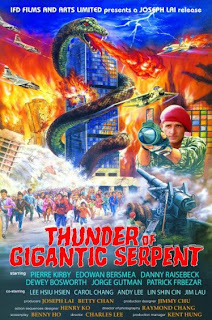 ...aka: Terror Serpent
...aka: Thunder of Gigantic Serpent

At a heavily-guarded military lab, scientists are working on a top secret experiment called The Thunder Project, which can make animals or plants grow up to 1000 times in size. There's a lot of talk about a special "formula" being utilized but it's really just a little glass box that shoots electricity into whatever is inside and makes it grow. After making a frog quadruple in size, the lab is attacked by a group of armed terrorists who want to get their hands on the formula. Most are shot dead, but one lady scientist manages to escape. During a car chase she throws the box out into the brush and fakes her own death by jumping out right before sending her car over a cliff. She ends up in a hospital, the terrorists continue searching for the box, the military and local police get involved and an American mercenary named Ted Fast (Pierre Kirby) tries to hunt down and kill the man responsible for things getting out of hand in the first place.

Meanwhile, a pudgy and extremely whiny little girl named Ting Ting is trying to keep her pet snake Mozlar hidden from her serpent-fearin' momma. Mozlar is no normal snake, though; it nods and shakes it head to answer "yes" or "no" when Ting Ting asks it questions! Ting Ting eventually finds the glass box outside on her back porch and decides that's the perfect home for her pet. She puts the snake inside, flips a switch (thinking it's a light), electricity shoots out and next thing she knows her pet is so big she has to keep it outside in a large storage building. Mozlar helps her defeat bullies in a game, plays ball and hide-and-go-seek with her and saves her life when she's trapped in a burning building. Eventually the terrorists show up and set a trap for the snake. It's electrocuted again and grows to a huge monstrous Godzilla size. Ting Ting is kidnapped by the lead terrorist and Mozlar goes on a rampage trying to save her. It knocks over a bridge, derails a train, busts a dam and eventually enters a large city and reduces skyscrapers into piles of rubble, while fending off tank and fighter pilot attacks sent out by the military.

If you've seen a giant monster movie from Asia before you pretty much know what to expect here. Horrible dubbing. Check. Hokey fx. Check. Stock footage. Check. Crowds of screaming people running through stairwells and city streets. Check. "Moral of the story" lines slipped in at the end. Check. The snake special effects, a combination of medium and large model snakes and miniature city model mock-ups may be a bit cheesy, but they still look better than the majority of crappy CGI effects utilized nowadays. This one doesn't have quite enough snake rampage action for my tastes (too much time is spent on various shoot-outs and karate fights) and you'll want to strangle the little girl by the end of the movie, but it's still watchable for fans of silly Asian monster movies.

As per his usual, Ho used his cut-and-paste method for this one. Much of the footage - including all of the stuff with the little girl and the monster snake - comes from a 1984 Taiwanese film called Da she wang ("King of Snakes") directed by Yu-lung Hsu.