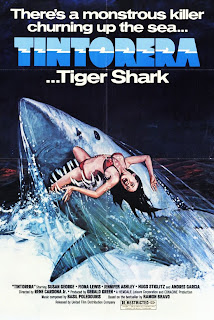 Horrendous JAWS cash-in mixes the killing spree of a giant tiger shark ("Tintorera") with the barely-clad sexual hijinks of a bunch of vacuous, intoxicated, hedonistic vacationers at a Club Med style resort. Skimpy on the horror scenes (the first attack doesn't even come until 30 minutes into the movie, and it's even longer until you get to the second one), but there's lots of loosely attired male and female flesh on display, lots of nauseating soap opera-level drama, lots of scenery and lots of random shots of the sun and water to ensure you're on the verge of dozing off throughout. Wealthy American Steven (Hugo Stiglitz) is on vacation in Mexico recovering from a nervous breakdown. He balances his time between lounging on his yacht in his speedo and scouring the beach with his binoculars checking out bikini-clad babes running around. He catches a glimpse of British tourist Patricia (Fiona Lewis), buys her a drink and next thing you know they're floating around on a raft half-naked talking about how much they're in love. After an argument, Patricia storms off and immediately starts seeing part-time shark hunter/scuba instructor and full-time rent-a-stud Mike (Andres Garcia). One morning Patricia decides to go for a nude swim and is immediately gobbled up by a large shark.

Steven and Mike forget about their previous fight (and obviously forget about Patricia since she's never mentioned again), begin to bond over their love for the ladies and start referring to one another as "my friend" and "my man." There's an attempt to justify all the objectifying and womanizing that goes on with a few brief snippets of dialogue about how men and women exploit one another, but whatever. When you see Mike at the bar with two babes telling Steven, "You can have whichever you want..." as the drunken bimbos giggle and nod their heads in indifference you pretty much key in to this film's mindset. Anyway, the two basically bed whatever willing ladies come their way, and believe me, every lady in this movie is willing. You almost begin to think this movie isn't striving to be anything more than an adolescent male sex fantasy, which would have been fine if you weren't expecting a horror movie with a giant, killer shark.

After a load of wasted time dedicated to sexual conquests, a bunch of drunkards partying on the boat and some shark harpooning (don't know if the sharks are actually being killed, but it sure looks like it), the guys find a depressed-looking Susan George in the bar downing drinks. This time, instead of fighting over the babe or trading the babe off, they decided to "share" the babe. This sparks some discussion that attempts to clarify the relationship everyone is involved in and assure the audience that three-way relationships aren't exactly aberrant behavior. A concerned looking Steven notes, "The thing is, I'm not even jealous when she's with you. On the contrary, I like what she does. And that's precisely what frightens me." This is followed by uneasy smiles and finally grins and understanding looks exchanged by both men in extreme close-up. Strange. Susan says "I'm not thinking, I'm just living." Yes, to any rational human the polyamorous lifestyle is practically harmless and the participants are adults capable of making their own decisions about who they want to love and fuck. But when Susan begins talking about having their love child, you'll be wondering where the hell the killer shark swam off to. And why the hell haven't we seen a killer shark since Fiona Lewis was devoured? Well, old Tintorera finally does show up to crash the party and eat one of the principals. I guess there will be no child conceived of the love of two fathers after all. Bummer.

So it's back to the mainland and the usual crap with an older guy offering to "trade" two blondes (one played by very lovely, chain-smoking future-TV-star-turned-horror-movie-regular Priscilla Barnes) for two brunettes (who Mark and Steve already nailed previously). Everyone jumps in the water for a swim and the shark shows up to eat one of the girls. Will our surviving hero finally get his revenge against the underwater fiend? You're not likely to really care and quite frankly you can fast-forward through the whole film and walk away with as much as you could have by actually sitting through it. There is not much overall violence, but a few bloody scenes and while there's a generous amount of nudity, there is no actual sex.
★
Posted by The Bloody Pit of Horror at 3:11 AM