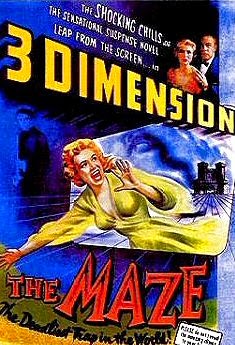 Gerald (Richard Carlson) and Kitty (Veronica Hurst) have just finished celebrating their engagement announcement in France with family and friends, when he receives a letter asking him to visit an ancestral castle located in Scotland. Gerald's uncle reportedly has fallen ill and has requested Gerald, the sole heir, be present. Gerald goes off to Scotland, leaving his future bride behind. A few weeks pass and he doesn't come back. Concerned, Kitty sends out telegrams but still doesn't hear back from her fiancé. Four more weeks pass and Kitty finally receives a weird response from Gerald, calling off the engagement and telling her to move on with her life. Not ready to give up on her relationship and looking for answers, Kitty hops on a plane and decides to pay Gerald a visit. Accompanying her on the trip is her level-headed aunt Edith (Katherine Emery, best known for her starring role in the classic chiller Isle of the Dead). When Kitty and Edith arrive at the MacTeam estate they immediately suspect something strange is afoot. For starters, Gerald seems to have aged twenty-years in a matter of weeks. Second, this once nice and charming guy has turned into a complete jerk who repeatedly demands they leave and never come back. When Edith comes down with a mild cold, Kitty uses it as an excuse to stay there to try to get to the bottom of things.

Why is Gerald being so cold and cruel to the woman he was just about to marry? Why is Gerald so opposed to having company? Why do the house rules state that guests must be locked inside their bedrooms at night? Why are guests forbidden to enter certain areas of the estate, such as Gerald's bedroom and a large hedge maze out back? And what's making those strange dragging noises every night? These are just some of the questions The Maze poses. The movie actually does a fine job building up mystery and intrigue. You genuinely become interested in what's going on and patiently await the resolution to explain the weird events that are taking place. And then IT happens... I definitely don't want to ruin the finale of this film because you're better off not knowing, but it takes one of the most unbelievable and jaw-dropping turns I've seen in any movie. It's wonderfully ludicrous in a way, but it also takes a pretty solid little b/w mystery and sends it straight into Z-Grade schlock territory. And yet, this ending seems so out of place, you're not likely to forget it once you see it.

Despite the ending (or maybe even partially because of the ending), I really enjoyed this odd obscurity. It's extremely talky and slow moving for the duration of the run time, but it managed to keep my interest throughout. Director William Cameron Menzies (who made the much more famous Invaders from Mars the same year) is best known as a two-time Oscar-winning art director and his set designs here are also really interesting. There's almost a silent movie feel to things, with model work for some of the exteriors, some painted matte backdrops and sparsely decorated interiors with very high ceilings. As with any good castle set there are also secret passageways and long staircases. This one also throws in a few rubber-bats-on-strings for good measure.

A few of the actors are a little stiff and awkward, but I liked most of the cast. Hurst is one of those obscure and mostly unknown actresses who unfortunately never seemed to catch on despite being both beautiful and talented. Emery, who also gets to play narrator in framing shots at the beginning and end of the film, is decent enough as the overly mannered and cautious aunt. My favorite however was Michael Pate as the silver-haired sinister servant who does this hilariously upright zombie walk every time he ascends the stairs. Also on board in smaller roles are Hillary Brooke (who played the title role in the Sherlock Holmes mystery The Woman in Green) and Lilian Bond (Whale's classic The Old Dark House). Of course Carlson also starred in IT CAME FROM OUTER SPACE, Creature from the Black Lagoon and some other horror flicks, so you've got yourself a pretty decent cast for genre fans right there. I say check it out!