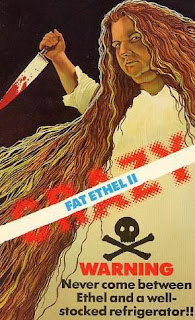 Directed by:
Nick Millard
So, you made a bad film over ten years ago that was so bad it developed a small cult following over the years. Now, you want to make a sequel and don't have any money: What do you do? If you are Nick Millard, you fire up the trusty camcorder, track down the star of the original film and use tons of the old footage to save money and pad out the running time. Now I don't mind the random flashback used here and there, but when at least half (maybe as much as three-fourths!) of the run time consists of recycled scenes, then I do have a problem. Hell, you have to draw a line somewhere! I don't even really have a problem with the filming format. Sure it looks incredibly cheap, but this is a sequel to an obscure B horror movie, so I wasn't exactly expecting production values. Nevertheless, that's no excuse for either the merciless padding or the terrible sound. The latter was obviously recorded with whatever shoddy microphone came built into the camcorder, so it's usually either too quiet or too muffled to make out what people are saying half the time. And all the camera does is basically zoom in and out on Ethel eating or sleeping, which becomes the lazy filmmakers cue to "flashback" to the first film. This goes on for I don't know how long, but it seems like an eternity.

Anyway, Ethel's back in a nuthouse and even though she killed six people in the first movie, is set free once again because of budgetary cuts or some such nonsense. She's first seen eating pudding, and the camera stays put on her until she scrapes the damn bowl entirely dry. A kind elderly lady named Hope Bartholomew (probably played by the director's mother/producer Frances Millard, who is also probably the same person as Irmgard Millard) has an opening at her halfway house, and Ethel ends up going there for a protracted stay. Ethel (looking a little grayer, but also a little skinnier) glares at everyone, eats, sleeps, laughs and meets a few of the nuts sharing space with her. There's a guy named Edgar who claims to have murdered his wife. Another guy (who is played by the same actor who played Ethel's brother in DEATH NURSE) thinks he's an insect. Well, I think he thinks he's an insect. It's kind of hard to tell, but several minutes are wasted with him running his hands up and down walls and wiggling his fingers. There's another long scene with him running around out in the yard trying to capture flies because he likes to put them in his soup.

Ethel's not taking too kindly to her surroundings or limited meals and she refuses to take her medication. A mean orderly (whose haircut almost defies description) serves everyone dog food instead of corned beef hash. He also eats an entire Three Musketeers bar in front of Ethel, which really pisses her off. She kills him by throwing a noose over his head and hanging him over a staircase. A detective, Lt. Frank Miller, shows up to ask some silly questions and basically just leaves because Ethel has a foolproof alibi (she was watching an episode of Gunsmoke alone in her room). Soon enough, Ethel and Edgar are fighting. He saw what she did to the orderly and blackmails her, demanding she give him her pudding for an entire month or he's squealin'! Pissed off again, she tries to put rat poison in Edgar's tea, but he's not dumb enough to fall for the same trick twice (his first wife tried to poison him also). Disappointed her first attempt was unsuccessful she instead decides to just stab him in the back with four different knives and leave his dead body in the kitchen. The cop shows up again, says "I might as well set up shop right here!" and leaves again without questioning anyone or making any arrests. So basically, Ethel resumes her killing.

Hope tries to take away Ethel's bag of pretzels and is bashed over the head with a candle stick. Dr. Stevens (pretty sure it's the director in this role) shows up to check up on Ethel. She chases him around the couch with a knife, stabs him in the back and goes outside where she dances around for several minutes with a bloody knife. There are many close-ups of feet and legs for some reason. The bloodiest scenes are all from the original and every single second of the new footage is completely perfunctory. Dumb, boring and the takes are gruelingly long. Priscilla Alden was funny in the first film, but is given little to do here and her dialogue sucks. This thing was so cheaply spit out that instead of making new credits, they just used the old ones from the original, nevermind the fact that no one from the original appears in this sequel other than the leading lady.
NO STARS!
Posted by The Bloody Pit of Horror at 2:50 AM

I'll probably cave in and watch this eventually--next November, I imagine--but I'm certainly in no hurry to watch another Nick Millard picture. This does sound worse than Death Nurse and lacking in the black comedy, which was the only thing that got me through Death Nurse. It's too bad he's so lazy, because shooting on video (straight onto VHS, I'm guessing) he has no real need to conserve film and he was fortunate enough to find someone with real screen presence with Priscilla Alden. She's no Sheila Keith, but still pretty good.