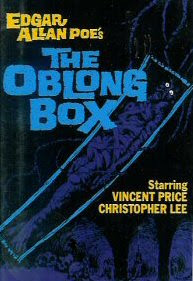 
Vincent Price is Sir Julian Markham, a sad-eyed 19th Century British nobleman who lives in a semi-reclusive existence in his castle home. But he's not entirely alone, his brother Edward (Alistair [Alister] Williamson), a facially-scarred madman who was somehow mutilated during an African tribal ritual years earlier, also lives in the home. Julian keeps his unhinged sibling safely locked away, until it is presumed he has finally died. But Edward's not actually dead and has mistakenly been buried alive. Uh oh! Julian weds Elizabeth (Hilary Dwyer) and moves on with his life, but Edward, who naturally managed to escape from the grave, is running around going on a throat-slashing rampage while dressed in a crimson velvet hood (the "masque of the red death"?). A flashback reveals that someone in the Markham family trampled over a young boy with his horse and a witch doctor had placed a curse on the entire family. "Special guest star" Christopher Lee (in a gray wig) is Dr. Neuhart, a surgeon who is aided by grave-robbers for his experiments and is subsequently blackmailed by Edward to provide him a place to hide out in exchange for some additional raw material.


Based loosely on Edgar Allan Poe's "The Premature Burial," as well as several other stories from the author, I've often seen this one written off as dull and too-familiar, which it is at times. But it's also entirely watchable and a quality horror film, thanks in part to a fine cast, convincing period flavor, a decent plot twist near the end and good photography. Some suspense is also built by keeping the killer entirely off-screen during the first half hour and his face concealed until the very end of the film, where it is still only seen in a state of semi-darkness. Price and Lee both have better and more sizable roles than they did in Hessler's SCREAM AND SCREAM AGAIN (also from 1969, also from AIP and also with costar Uta Levka, who appears here as a prostitute). Rupert Davies also has a role. The full on-screen title is EDGAR ALLAN POE'S THE OBLONG BOX. Michael Reeves (of WITCHFINDER GENERAL fame) was actually slated to direct this one but after his untimely death, the film was taken over by Hessler. Scripted by Lawrence Huntington with additional dialogue from Christopher Wicking.