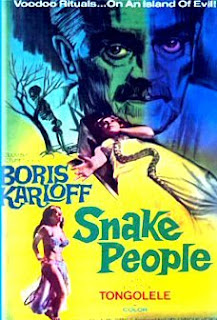 Echoing narration informs us about the "diabolical" new threat of voodoo on the island of "Korbai" near Haiti and a laughing, sneering dwarf in sunglasses cuts the head off a (real) chicken. Then Anabella (played by Julissa), a member of the International Anti-Saloon League informs some soldiers that, "Modern science has proven that alcohol is responsible for 99.2% of all the worlds sins!" She arrives on the island with others to visit her uncle Carl von Molder (Boris Karloff, or his masked double). Meanwhile, blue-faced zombies are overrunning the island. Voodoo cultists kill soldiers with a blowgun, strangulation and machete and regularly resurrect the dead with the help of the dwarf (who whips them). Rabid zombie women eat a man and one soldier adopts one as his girlfriend to scratch his back and fan him. ("Imagine a beautiful woman that can't talk. Every man's dream!") The niece has an extremely bizarre dream of her evil double suggestively sucking on a (real, live) snake before kissing her (?)


Little of this movie makes sense and the ending stinks, but it has some weird, senseless stuff to recommend. Lots of Mexi-horror regulars in this one - Carlos East, Rafael Bertrand, Tongolele, Quintín Bulnes and Santanón as the dwarf. It's one of four much-hated movies Karloff did in 1968 before his death, constituting his final film work. The other three were La camara del terror (aka THE FEAR CHAMBER or Torture Zone), Invasion Siniestra (aka The Sinister Invasion or Alien Terror) and Macabre Serenade (aka House of Evil or DANCE OF DEATH).