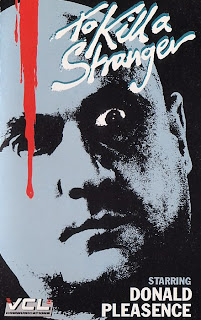 This entertaining Mexican/U.S. production seems to have a slight identity crisis, but has enough horror touches in the first half to be considered a genre picture. Singing star Cristina Carver (Angelica Maria, who performs one song) is on her way to see her husband John (Dean Stockwell) when she wrecks her rented BMW. She walks to a gas station, gets a lift from wealthy Colonel Kostik (Donald Pleasence, who really steals the show her with a creepy/sleazy characterization) and goes back to his large house to use his phone. He turns out to be a psychotic sex predator who lies about having a wife, tries to rape and strangle her and then chases her around in his front yard with a shotgun. After hitting him over the head several times and shooting him, he finally dies, she panics, throws the body in a well and buries the evidence, scared his stature and reputation as a respected war hero will kill her chances at a fair trial. She's right, of course. Though a bit far fetched, this thriller (which was filmed in 1982 but not released in the US until 1985) is making a serious statement about police and military corruption in South American countries and of the poor legal rights given to international tourists abroad.

Other than Pleasence and Stockwell, people may be interested in seeing Aldo Ray in a minor role as a police inspector and Playboy cartoonist Sergio Aragonés (who was very badly dubbed) as a military officer. American director Paul Leder (of I DISMEMBER MAMA fame) was the post production supervisor and the director himself pops up in a small supporting role. Director Moctezuma is best known for his atmospheric Satanism flick ALUCARDA (1975); several of that film's cast members (Martin Lassalle, Susanna Kamini) show up in minor roles here, as does the director himself.
★★1/2
Posted by The Bloody Pit of Horror at 7:06 AM