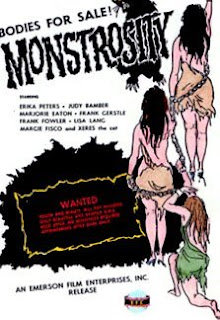 
Dr. Otto Frank (Frank Gerstle, best known for his TV and radio voice-over work) is a grave-robber and scientist who, with help from his hairy "monstrosity," steals fresh corpses from a mausoleum to further his brain transplant experiments. His lab and 'cyclotron' machine (which is used to reanimate dead bodies with new brains) is located in the basement of a large mansion belonging to old crone Hetty March (Marjorie Eaton), a rich, bitter, wheelchair-bound matron who funds his experiments and wants him to put her brain into a "fresh young live body" when he finally does master his technique. The two hire three international 'domestics' (from Austria, Mexico and England) to come to their home. Mrs. March pokes and prods them with her cane, makes them spin around and forces them to strip down to their underwear for a thorough investigation of what kind of bodies they're packin'. The Hispanic one (Lisa Lang) is deemed "useless" because she has a birthmark on her back, so they transplant a cat's brain into her head. She eats a mouse, claws out eyeballs and spends most of her screen time crawling around hissing at people. There's also another monster kept chained up out in the yard and a 'walking corpse' (a benign zombie lady who doesn't really serve any purpose). This ridiculous mess has a ludicrous plot, terrible acting (those awful 'foreign' accents from the ladies about take the cake), silly dialogue ("She doesn't have a brain. There may be advantages.") and some timid flesh-baring (nude women put into the cyclotron heave their naughty bits covered by a couple of steel beams).


Erika Peters (who was also in William Castle's MR. SARDONICUS, as well as HOUSE OF THE DAMNED) stars, with Judy Bamber, Frank Fowler and introducing Xerxes as the pussycat brain donor. It's narrated by a young Bradford Dillman, who took no credit for doing so (his brother Dean Dillman, Jr. helped write and produce...). The film is also available with commentary from the Mystery Science Theater crew, but it's just as funny without someone force feeding you puns. The original title was MONSTROSITY.