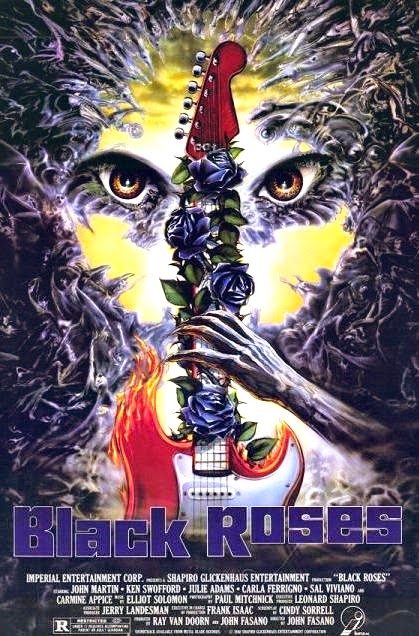 
A rock group called Black Roses decide to open their tour in a small town and the teens go wild, causing a commotion from parents groups (led by Creature from the Black Lagoon star Julie Adams in her one scene cameo). This time the old folks are right, though, because the band has already sold their souls to the devil and are now on a quest to collect some followers. Teenage head-bangers become amoral minions of Satan, dress in leather, start using lots of hairspray and kill off their parents using supernatural powers. Lead singer Damian (Sal Viviano) has hilarious teased hair, wears shoulder pads with fringe, black gloves and tiger-print bikini briefs over his leather pants and turns into a giant lizard at the end. The hero ends up being the friendly high school English teacher, played by John Martin. There's plenty of bad 80s music, topless scenes and fun special effects (a guy sucked into a speaker, zombie groupies...); making this one of the better and most entertaining entries in this particular sub-genre. It's also notable for coming in a cool VHS box with a puffy 3-D cover that lots of people remember fondly. Vincent Pastore (later of the hit show The Sopranos) has a small but memorable role as a bad dad and Carmine Appice of the group Vanilla Fudge appears in a supporting role as Vinny.