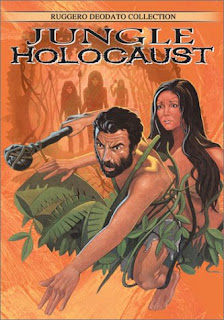 
Part old-fashioned jungle survival picture, part stomach-churning mondo animal slaughter movie and part standard issue gore-fest, this nasty little import will probably please fans of Deodato's Cannibal Holocaust, even though it still comes off as a lesser cousin and is nowhere near as gruesome, disturbing or thought provoking. Robert Harper (Massimo Foschi) and Rolf (Ivan Rassimov, star of the original cannibal exploitation film MAN FROM DEEP RIVER) are a pair of oil company researchers who stay out on their scouting trip a little too late and have to land their plane deep in the jungles of South America. Spotting some debris from a previous plane landing and other warning signs they shouldn't be there (i.e. human skulls), the men, plus their pilot Charlie (Sheik Razak Shikur) and his companion Swan (Judy Rosly) decide to spend the night inside the plane. Swan unwisely goes outside to piss and doesn't return.

The next morning, the men go out looking for her, Charlie is impaled by a booby trap and Robert and Rolf catch sight of a stone age cannibal tribe feasting on the remains of young Swan. Trying to get back to the plane, the two build a raft and end up crashing by some rapids. Rolf is washed downstream and Robert is left lost and all alone in the big bad jungle to fend for himself. Starving, he eats some (poison) mushrooms, gets sick and passes out and next thing he knows he's being held prisoner by the tribe. They rip his clothes off, flick his genitalia, hoist him up in the air and drop him (thinking he's a bird), throw rotten food at him, deny him water and even piss on him. From his cell he also gets a pleasant view of fire ants slowly eating a stray man's arm off and the tribe killing (yeah, really killing) a snake and a alligator; both clubbed, skinned and hacked up in loving detail. He also catches on to the fact that they are plotting to sacrifice him to a gator god, so first chance he gets, he high tails it out of there, taking along the inexplicably hot and well-endowed native babe Pulan (Me Me Lai, who was also in Man from Deep River, which I'll have to get around to watching one of these days) as his prisoner.

Pulan is resistant at first, but Robert shows her who's boss by leading her through the jungle like a dog on leash, slapping her around a bit and raping her doggy-style. The next day she's a Stepford Wife off the chain and offering him a buffet of raw fish, berries and plant roots on a shiny green leaf. Robert and Pulan eventually find Rolf, leg badly injured and hiding out in a cave, and the three live it up Swiss Family Robinson-style for a few minutes before heading back out to search for a plane. Barely making it through the alligator and snake infested land, the two finally spot the plane and head out toward it, only to be ambushed once again by the tribe. They spear Rolf and capture Pulan and drag her back to the camp, where she's promptly stripped, speared, decapitated, gutted and filled with fire-roasted hot rocks. After all this, Robert finally regresses back to his primitive side and fights back with a venom-dipped spear; showing them he means business by killing a native warrior and gnawing down on a still-beating raw human heart. Will he make it back to the airplane? Or is one of the popular alt titles called The Last Survivor for no good reason?

There's loads of gore and full male and female nudity plus a scene where a snake kills a komodo dragon (it was actually filmed in Malaysia; not South America) and a tasteful scene of a native woman feeding her newborn baby to a crocodile. The Shriek Show DVD has an introduction by Deodato (he claims the natives used in this film were actual natives and that the animal slaughter was added by the producer against his wishes), Deodato commentary and some trailers. The film (originally titled Ultimo mondo cannibale and also known as Cannibal, Carnivorous and Last Cannibal World; the title of this print) claims to be based on a true story.