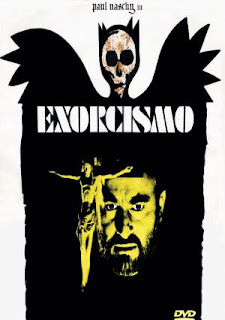 
Leila (Grace Mills) is a teen turned on to Satan (and LSD) by her no-good archaeologist fiancé Richard. There's a neighbor-hood hippie demon cult hanging out at the local decrepit ancient castle, where Leila and Richard drink blood, drop drugs, join in sex orgies, dance to lame psychedelic rock and participate in black mass ceremonies where the guys wear pants, masks and capes and the women don't wear anything at all. Unfortunately, these kind of extracurricular activities have left Leila open to demonic possession from the dreaded "spirit of evil." Leila also comes from a screwed up family, which doesn't help matters. Her older brother John is a recluse who seems to be in love with her. Her mother Patricia (Maria Perschy) is depressed because she thinks she was responsible for the father's death. To top it off, her sister (Maria Kosti) is a slutty semi pro golfer named (gasp!) Debbie Gibson. There's plenty of hired help around also to waste more time. Two maids (a young one who takes her clothes off a lot and an old one who spies on everyone), plus Udo (Luis Induni), a bald voyeuristic handyman who peeps in on Leila changing clothes, takes nude pictures of her and sneaks into the pool house to take a sniff of her freshly used bathing suit. Oh yeah and Borg, the pet German Shepherd.

Jacinto Molina (under his nom de thesp, Paul Naschy) is Father Adrian Dunning, the doubting priest (zzzzz) who starts snooping around after John and Richard both have their heads twisted around backwards. Leila tells him "They say I am perverse and I'm going to prove it is true!" During her birthday party, she tells her guests "You make me sick! I hate you all!" and when mom suggests having a doctor come over she she screeches "I don't want to see that fat ass!" Debbie suggests they commit Leila to a "sanitory," but Leila runs off and joins the cult again. She is rescued (again) and brought back home (for the third time).

By this point in the movie, there's only about ten minutes left to go and all we've basically seen is some very boring scenes of characters talking and whining about how terrible and f-ed up their lives are and how Leila is acting weird. It's almost as agonizing to sit through as an Andy Milligan movie, minus the gore and laughs. But finally during the last few minutes we get the movie the title implies - an EXORCIST-like possession flick. Unfortunately, the best part of it are the contact lenses Leila gets to wear. Some cheap time-lapse slashes appear on her arms, legs and face, she gets scabby lips and her eyes take on the appearance of blue and white marbles. She begins reeking of rotted flesh, spits up some clear gunk, starts speaking in her dead dad's voice, sneaks into her mom's bedroom, slaps her around a bit and calls her a "filthy bitch of a whore." In comes Father Adrian, who now finally believes she is indeed possessed, fends off her attempts at seduction, hallucinates frogs and eels are in the kitchen and douses Leila with holy water. Doors open and close, a mirror breaks, there's sudden thunder and her bed rises up off the floor. After she tackles Dunning and the two roll down the stairs, the spirit is out of her and into - guess who? Why, Borg the family pooch! The demon dog then turns on Adrian and chews him up a little before he impales it on a fire poker. Then we get one of the most irritating final shots ever committed to film. It's Leila on the floor going from her hideous appearance back to her normal sexy self. But then there's ANOTHER time-lapse effect that sort of seems to suggest that the demon has possibly reentered her body. It's so badly done, you really have no clue what to make of it, which is the final slap in the face to anyone who has just realized they've wasted an hour and a half on this worthless POS.

NO STARS!
Posted by The Bloody Pit of Horror at 3:40 AM