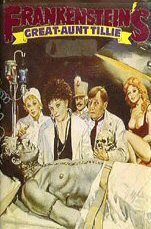 Directed by:
Myron C. Gold
I literally cringe at the thought of ever stumbling across something as bad as this in the future. To make it worse, the damn thing goes on forever. Over TWO HOURS of horrendous, non-amusing gags, merciless mugging, serious overacting, stupid dialogue, multiple senseless flashbacks (not that the main plot-line makes much sense), 'comic' sound effects, toilet humor, cartoonish dubbing (on the Mexican extras) and various scenes that seem like rejected outtakes from YOUNG FRANKENSTEIN. It might also be noted that this shot-in-Mexico cheapie was of mammoth mini-series length (!!) at one point and the version I saw is actually the condensed version of the story! No way in hell am I ever going to punish myself by trying to seek out the full-length version. There's a period setting, costumes, cars, etc., but the time frame is never revealed other than a title card that says "100 Years Later." Donald Pleasence has (possibly) the worst role of his entire career; even worse than his noxious Roman emperor Claudius in WARRIOR QUEEN (1985). He's Baron Victor Frankenstein, who shows up in the small Transylvanian village of "Mucklefugger," along with his "190-year-old" feminist "aunt" Fraulein Matilda "Tillie" Frankenstein (Yvonne Furneaux) and mega-busted, mega-stupid blonde wife Randy (played by over-the-hill former sex-pot June Wilkinson). The three inadvertently stir up a variety of problems for the townspeople, who have been free of the antics of the Frankenstein family for over a hundred years. Tillie saves the "Cradle of Compassion" orphanage and holds "ERA" rallies where the women protest for equal rights by holding up signs that say "No Vote, No Whoopee!" They spray seltzer water on cops, demand a woman get a place on municipal counsel and wear "bloomers" to piss the guys off. Tillie and co. must also come up with money to pay back taxes on the castle before it is repossessed and discovers a Frankenstein monster in the basement, that is brought back to life for more lame gags. The creature is big, blue, has bangs, wears suspenders and has very little to do in this movie.
Pleasence, acting drunk and/or senile throughout, mumbles through most of his dialogue. During one scene, he is seen running around in a dress, lipstick, a frilly hat and an apron, sniffing shoes and playing the flute to calm down the monster. Not a pretty sight. Poor Donald. Poor Furneax, too. She gave excellent performances in two genre classics: playing one of Hammer Studios' all-time finest heroines in THE MUMMY (1959) and then Catherine Deneuve's self-absorbed sister in Polanski's REPULSION (1965), before being reduced to garbage like this. Wilkinson has always been a low-grade schlock regular whose massive mammaries do the acting for her. She almost does a nude scene after a bubble bath, has multiple scenes in bed with Pleasence and always wears clothes so tight they can barely contain the "twins." The other two notable guest stars here are Aldo Ray (playing it completely straight) as Burgomeister Niederhangen and Zsa Zsa Gabor (!) as Clara, Victor's first wife. Gabor must have had a larger role in the unedited version, because here she is seen for a few seconds in a silent flashback lying in bed with Pleasence, which is an effortlessly campy sight if there ever was one.
There's also an incredibly mind-bogglingly bad gag poking fun at the original FRANKENSTEIN (1931). When the monster (Miguel Angel Fuentes) approaches a little girl named Maria by a pond playing with a flower, you almost expect him to pick her up and throw her in. Instead, the little girl says "Want to play with me? On second thought, you're too old for me. Why don't you play with my sisters over there? Sleepy, Sneezy, Grumpy, Dopey, Happy, Horny and Doc." (??) The 'sisters' then do a frantic dance in Capri pants, disappear and reappear in long flowing white gowns doing ballet (???) Another example of the general level of comedy in this mess is a sign hanging on the castle gate saying "Beware of low flying bats." Another oh-so-unfunny moment has two guys trying to spy on the Frankenstein family using binoculars. One says "I can't see a damn thing," so his buddy removes the lens covers for him. I'll just stop right here.
NO STARS!
Posted by The Bloody Pit of Horror at 6:27 AM