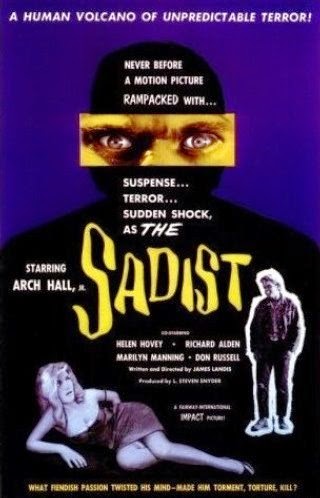 
After the pre-credits prologue explaining what a "sadist" is, complete with a close-up of bugged-out eyeballs, I figured I might be in for a night of silly low grade schlock. Boy was I was wrong. This is a taut, well-made, suspenseful and highly impressive little thriller where much is accomplished with very little. School teachers Ed (Richard Alden), Doris (Helen Hovey, in her first and only film appearance) and the older Carl (Don Russell) are on their way to a Dodgers game when their car breaks down somewhere in the Arizona desert. They make it to an off-the-beaten-path gas station / auto shop / junkyard but can't seem to locate the owners. That's when sneering, sweaty, unhinged, remorseless nut-case Charlie Tibbs (Arch Hall, Jr.) shows up and immediately points a gun in their faces. Accompanying him is a giggly, child-like, nearly mute (aside from the occasional whisper) young woman named Judy (Marilyn Manning). Charlie takes their money, cold cocks Carl with the gun a few time and plans on stealing their car after he forces Ed at gunpoint to fix it. As they wait, Charlie terrorizes them in a variety of different ways... and he loves every minute of it! He tears up pictures of their families he snatches from their wallets, gropes the terrified female teacher and rubs her face in the dirt, rips their clothing and pretty much makes it clear he's going to kill all of them once the car is fixed. He also guns down two cops and shoots someone point blank right in the face. Charlie and his woman spend a lot of time sitting around sipping soda and laughing while watching their victims squirm.

Admittedly, this sounds like routine psycho movie stuff, but director and writer James Landis manages to play all of his cards right without much error. One of the most impressive things about this economy budget effort is that most of it takes place in one spot where the victims work on the car and their assailants sit nearby taunting them. Amazingly, even with this set-up and lack of location change, the film always manages to always keep your attention and it never even seems to drag. The heat of the desert location is palpable. The level of tension and suspense is always on the rise, as is the desperation of the victims, who know they have to do something quick or they're dead meat. It's all very well modulated and paced. The killer is completely unpredictable and did things I wasn't expecting him to do when I wasn't expecting him to do them. The last fifteen minutes do offer up more traditional action scenes, with a chase / stalking scene through the desert and an abandoned house. These scenes are also very well done and there are several genuine surprises in store for patient viewers, as well as an effective finale.

I'm not too familiar with most of the actors in this, but I felt that all of the performances were pretty good. Any viewer of EEGAH! (1962) may have a hard time believing that Hall Jr. possessed any acting talent whatsoever. Well, here's your proof. He's almost too convincing in this nasty and thoroughly unlikable role. The rest of the cast does just fine, too, including Hall's Eegah co-star Manning. Archie's pop, Arch Hall, Sr., also does the opening narration and radio announcer voice-overs here. In addition, the film is nicely photographed by "William" (Vilmos) Zsigmond.

Quality vintage genre films like this one are just as relevant today as they ever were. First off, they're simply a nice change of pace to watch. Secondly, they serve as shining examples that overkill gore, rapid-fire ADD editing, loud soundtracks, computer effects, murky / dark color schemes (cause all horror flicks have to look like they're covered in grime, right?), shakycam and break-neck pacing of today often do little but distract from the meat of the story. This one takes place is broad daylight and manages to be starker, more tense, more suspenseful and scarier than most movies being passed off as horror these days. No distractions, no flash, no gloss, no tabloid celebrities rounding out the cast, done on a small budget... Just a well made film that knows what to do and how to do it.