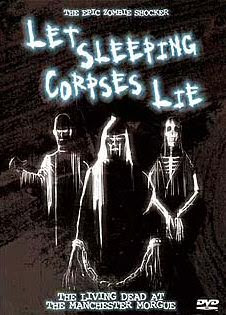 ...aka: Breakfast at the Manchester Morgue
...aka: Do Not Speak Ill of the Dead
...aka: Don't Open the Window
...aka: Fin de semana para los muertos
...aka: Let Sleeping Corpses Lie
...aka: No profanar el sueño de los muertos
...aka: Living Dead at Manchester Morgue, The
...aka: Zombi 3 (Da dove vieni?)
Directed by:
Jorge Grau
Probably the best zombie film to be released in between Romero’s NIGHT OF THE LIVING DEAD (68) and DAWN OF THE DEAD (78). In rural England (where this was filmed), biker George (Ray Lovelock) is left stranded in the country when his motorcycle is accidentally hit by Edna (Cristina Galbó), who’s also just arriving in town to help her brother-in-law Martin (José Lifante) commit her frantic, drug-addicted sister Katie (Jeannine Mestre) for treatment. Nearby, some agricultural scientists are experimenting with ultra-sonic radiation to decrease the insect and pest population in the area. Instead, the sonic rays have an adverse effect on the nervous systems of bugs, infants… and the recently deceased. The living dead are soon shambling their way through town, killing and consuming victims. But these aren’t your usual run-of-the-mill pale-faced, red-eyed animated corpses, but ones with super-strength and the ability to raise other stiffs with fresh blood. Can George and Edna convince the authorities what’s going on before the zombie population gets even more out of control? Can they convince name star Arthur Kennedy, playing a screaming police sergeant who hates long hair, “fag clothes,” sex and drugs and seems to have a bone to pick with everyone in the movie, of anything?

All-around, this is a very nicely done horror film with decent acting, a fast-paced and environmentally conscious storyline, stylish photography, some suspense and an excellent, bizarrely disquieting music score comprised of natural sounds (whispering, distorted voices, underwater sounds, etc.). There’s also an excellent cemetery sequence (with the zombies trying to bust down a door with tombstones they pluck from the ground) and a real bloodbath of a hospital climax (which includes a woman getting her breast ripped off). Released theatrically in the United States as DON'T OPEN THE WINDOW! (often double-billed with the completely unrelated DON’T LOOK IN THE BASEMENT) and first available on tape (heavily cut) as THE LIVING DEAD AT MANCHESTER MORGUE. The disc from Anchor Bay is a very good looking print and comes with a long interview with Grau, plus an introduction, TV and radio spots and still gallery.
★★★
Posted by The Bloody Pit of Horror at 7:33 PM